Review of The Academy #2 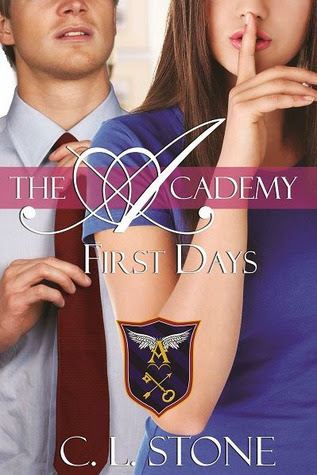 About:
Sang Sorenson used to be the invisible girl in class. As a new student to Ashley Waters High School, Sang hopes that her new friends will be the change she’s been craving and will make fitting in a breeze.

But Academy students aren’t there to take it easy. The high school is overcrowded and rife with violence. When fights begin, Sang will uncover the true reason the boys traded in their private school life for a public one.

The principal and vice principal are hot to take Sang down, and her own mother is determined to entrap Sang forever in her belief that the safest place to be is in the shadows. Despite this, Nathan, Luke, Kota, North, Silas, Victor, and Gabriel will discover Sang’s unyielding loyalty.

And they will sorely need it.

I haven’t blogged for a while, purely because I haven’t read anything that has excited me recently. I seem to have ‘readers block...’ that was until I came across the Academy series by C.L. Stone. This is one of those addictive series that you just cant put down, but the great thing is that the books are written and released very quickly, with at least two releases per year!

The books have a female protagonist called Sang, who lives with her elder sister and parents. The books tell us that her mother is unwell, but apart from being mentally unstable I am not sure what her actual condition is. Sang’s mother forbids her daughters to interact with other people, scaring them with news stories about serial killers and rapists. As a result, Sang has never has a friend but at the same time she feels imprisoned by her mother’s watchful eyes and strict rules.

The story begins when Sang sneaks out in the middle of the night to spend the night in an empty house. She intends to return home in the morning but wants to stay one night away from her house, by herself; free. Her plan doesn’t go to plan when she is attacked by a dog and the dog’s owner, a boy from her neighbourhood, helps Sang with her injuries. She’s scared of this stranger’s kindness, fearing that he has a secret agenda like her mother’s always told her about boys, but at the same time she cant help but trust him. Soon enough, Sang realises that her mother was wrong, and not everyone is evil.

Sang becomes friend’s with her neighbour, Kota, and his group of friends and finds herself sneaking out to see them on a regular basis. What i liked about the book is that Sang, who is not used to holding hands, hugging, and any kindness altogether, is welcomed by this group of boys who all care for her as one of their own. In return, Sang is a loyal friend, knowing that they have their secrets but still trusting them with her own. She finds a comfort with her friends that she has never felt before.

But there is more to the group than appears. These boys are from a private school called the Academy, and they are attending Ashley Waters on an important mission. Although Sang has become close to the group of seven boys, she is not allowed to know the Academy’s secrets. Since Sang is very close to the boys, she becomes a target when she attends the unruly school. Sang is so used to being invisible and unnoticed at her previous schools, that she finds the attention strange.

I am really enjoying this series, and have just purchased the third book. Cannot wait to read more!

"I mean it," Gabriel said. "Do you know that girl that came after us nearly gave me a heart attack? She said Trouble's in trouble. Again. Second time in a week. And what do I see when we get to the hallway? Trouble jumping from the f***ing second floor, does a barrel roll and hobbles up to get back into the fight. And then I get up to the second floor, and you're on top of some mother****er on top of Silas. You took on the whole goddamn school. F***ing beautiful. So that's like quadruple grounding because you went in twice. I swear if you go over that balcony again, I'm going to break your damn feet so you can't go anywhere near it."