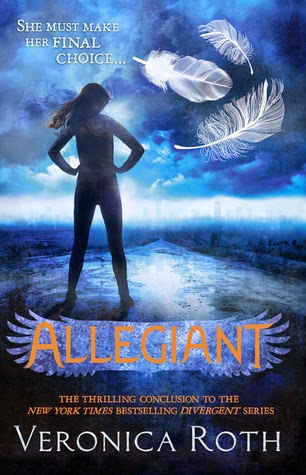 About:
The faction-based society that Tris Prior once believed In is shattered—fractured by violence and power struggles and scarred by loss and betrayal. So when offered a chance to explore the world past the limits she’s known, Tris is ready. Perhaps beyond the fence, she and Tobias will find a simple new life together, free from complicated lies, tangled loyalties, and painful memories.

But Tris’s new reality is even more alarming than the one she left behind. Old discoveries are quickly rendered meaningless. Explosive new truths change the hearts of those she loves. And once again, Tris must battle to comprehend the complexities of human nature—and of herself—while facing impossible choices about courage, allegiance, sacrifice, and love.

Told from a riveting dual perspective, Allegiant, by #1 New York Times best-selling author Veronica Roth, brings the Divergent series to a powerful conclusion while revealing the secrets of the dystopian world that has captivated millions of readers in Divergent and Insurgent.


When Allegiant was released, I heard a number of reviews, mostly disappointment over the ending. I won't spoil the ending for you, but I was hesitant to read this book because I knew the ending beforehand. And so I delayed reading Allegiant for quite a while until now and I must say I think people overreacted. Yes, it was a very sad ending, but at the same time the divergent series wasn't a fairytale that needs a happily ever after. I think the ending made it more realistic and I don't think it would be fitting otherwise.
I've read the series like evry other divergent fan and adored the movie (especially Theo James as Four). In Allegiant we see that the group living in Chicago have snuck outside to the outside world, where they believed that they could help those that need it; as per Edith Prior's video. ‎Little do they know that their lives have been lies and there is more danger inside Chicago than outside.
The Bureau used them all as part of their experiments, never interfering when there was trouble and wars and only when there appeared to be danger to Divergents did they intervene. Tris, Four, Christina and the others aren't sure where they stand and what they need to do.
Although there are no factions on the outside, everyone is divided as a 'genetically damaged' (GD) or a 'genetically pure' (GP). What's worse is that Tris is GP and Four is GD, which creates rifts in their relationships because Tris doesn't believe there's anything wrong with him, and Four has received confirmation of something he's always known; that he's broken/damaged.
Again, there's a lot of fighting and deaths but we do see some rare, cute scenes bet‎ween Tris and Four. I guess this was a miserable end to the series but I still loved it although I'm sad to see it end!
Zed (:
Favourite Quotes:
"You're not very nice," I say grinning.
"You're one to talk."
"Hey, I could be nice if I tried."
"Hmm." He taps his chin. "Say something nice, then."
"You're very good-looking."
He smiles, his teeth a flash in the dark. "I like this 'nice' thing."
Why do you care? I ask myself. He betrayed you. He didn't try to stop your execution.
I don't care‎. I do care. I don't know.
I thought that when I received Christina's forgiveness, the hard part of Will's death would be over. But when you kill someone you love, the hard part is never over. It just gets easier to distract yourself from what you've done.
"You know what Mom told me once?" he says, and the way he says Mom, like he didn't betray her, sets my teeth on edge. "She said that everyone has some evil inside them, and the first step to loving anyone is to recognize the same evil in ourselves, so we're able to forgive them."
It seems like the rebellions never stop, in the city, in the compound, anywhere. There are just breaths between them, and foolishly, we call those breaths “peace.”
I fell in love with him. But I don’t just stay with him by default as if there’s no one else available to me. I stay with him because I choose to, every day that I wake up, every day that we fight or lie to each other or disappoint each other. I choose him over and over again, and he chooses me.
“These people have no regard for human life,” she says. “They’re about to wipe the memories of all our friends and neighbours. They’re responsible for the deaths of a large majority of our old faction.” She sidesteps me and marches toward the door. “I think they’re lucky I’m not going to kill them.”
To me, when someone wrongs you, you both share the burden of that wrongdoing-the pain of it weighs on both of you. Forgiveness, then, means choosing to bear the full weight all by yourself.
People talk about the pain of grief, but I don’t know what they mean. To me, grief is a devastating numbness, every sensation dulled.
“I know Zeke’s still weird around you,” she says, slinging an arm across my shoulders. “But I can be your friend in the meantime. We can even exchange bracelets if you want, like the Amity girls used to.”
“I don’t think that will be necessary.” (Tobias)
Posted by Zed at Saturday, April 26, 2014 No comments: 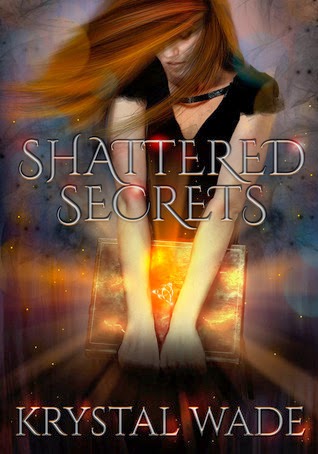 After being kidnapped, hogtied, and stuffed in the trunk of a car, seventeen-year-old Abigail Nichols' boy problems seem unimportant.
She couldn't be more wrong.

The boy who saves her holds her heart.

Magical beings who guide human emotions are fighting an invisible war dating back to the dawn of time, and Abigail's one of them. The more she learns of her heritage, the less she wants to know. Armed with a very old, very massive book to teach them about their history, Abigail and Derick run away to a place where they think they can be safe and happy, only to have their troubles secretly hitch a ride.

Her history book is in a sharing mood, and it tells her to keep a secret of her own.

But has she put her trust in the wrong place?

And will the world survive if she has?


Abigail's biggest problem was that she's always had feelings for her best-friend, Derick, and finally he kissed her but then avoided her ever since. Like any other teenage girl, her biggest problem was boys, until she's kidnapped by psychos who talk about killing her. Derick and another school-friend Mark who has a major crush on Abby, rescue her but the kidnappers are still out there looking for her. because she's not like any other girl, Abby has powers she has no idea of, and apparently so do Derick and mark. What's weirder is that derick's powers came alive when he kissed her, which is why he stayed away since.


But now abby's life is at risk, she finds out she's superhuman and adopted, and the fate of humanity is in her hands.


This was a good read, a bit slow-pacing at times, especially when Derick takes Abby to the island safe-house. I thought the immense action at the start died down for too long, and I was tempted to skip to the end, but glad I didn't. The story picked up pace very quickly when there are problems in the safe zone, and it becomes incredibly hard to know who to trust. Especially when Abby trusts this book more than her friends and family. I was wary of the book from the start since it reminded me of Riddle's diary from Harry Potter and Ron's father saying never to trust something with a brain if you can't see where the brain is kept. Overall, a good read, thanks NetGalley!
Favourite quotes
"I thought you might be awake. You should not eavesdrop. It is rude."
I opened my eyes and faced the men, anger filling every inch of me. I was going to die anyway. "Kidnapping, stuffing a girl in a trunk, punching said girl and tying her up on a couch with intent to kill her is rude. Me overhearing you say all that is unfortunate."


We're the mysterious Maker's best. I got enough of that from Mr. Crawford. Being all-powerful wasn't exactly in my life plans, not anymore. Could I even return to normal after this?

"What happened out here? What happened on the beach? Don't give me the 'leave it at that' either. I'm not stupid, and i'd prefer not to think im losing my mind."
Derick laughed. We're aliens from another planet, come to eat your brains and kill all your children."
Posted by Zed at Tuesday, April 08, 2014 No comments: