Review of Among the Shadows 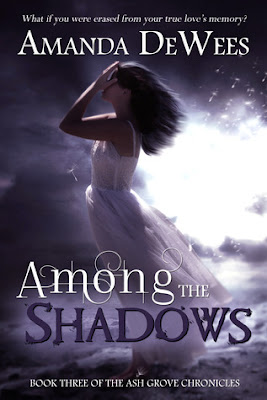 
Just hours after Joy and Tanner’s daughter is born, Tanner finds himself in a world where Joy doesn’t know him and their baby doesn’t exist. But when he thinks he has found the source of the magic that has undone reality, a heartsore Maddie makes a wish that alters history even further. With time now growing short for Tanner, he must try to win Joy’s trust and convince her that they have a future together—even though their past has vanished.
As the fabric of reality begins to fray, an old enemy arises amid the chaos... and Joy and her Ash Grove friends find themselves fighting to save the world as they know it. This thrilling sequel to The Shadow and the Rose and Casting Shadows will keep readers guessing as it races toward its astonishing conclusion.


Reading the Ash Grove Series has enabled me to see Amanda De Wees develop as a writer and it’s great to see how as each book progresses there is so much more to offer to the reader. I believe Amanda saved most of the magic until last. My point is that this book was completely fantastic. There were so many twists and changes I became dizzy from the rollercoaster ride.


Among the Shadows demonstrated how one event can have a domino effect on subsequent events and the corresponding story. For example, I completely forgot that is was Sheila who dared Joy to pick the rose from the grave in the first place, triggering Joy and Tanner’s relationship to begin.


Usually I can guess what will happen next with most stories but Amanda kept me on my toes. Just as I thought Joy and Tanner’s problems had finally resolved, one technicality would change everything.


In previous reviews of Ash Grove Chronicles I have been quite harsh towards Tanner but I felt so sorry for him in the third book. This was probably because he suffered the most this time, yet he kept fighting for his family. First his wife forgets him and his past, his new-born baby is removed from existence, then his arch-enemy, Melisande, is revived and torches him so he goes blind and ruins his appearance. Not to mention the shape shifter Raven takes along Tan’s appearance and pretending to be him whilst staying with Joy and baby Rose.


I was glad of Raven’s change and to see him leave Melisande and opt for a less evil life. I am curious to know what became of ‘Ray’s’ alternate life.


Maddie has always been my favourite character in the last two books but her place at the top is now tied with Cavanaugh’s ghost. The ghost was unintentionally funny and I’ve noted a couple of my preferred quotes below.


As always I recommend the Ash Grove Chronicles to everyone, and now I recommend even more so after reading Among the Shadows. I look forward to reading more from Amanda’s work as I suspect she has many more surprises up her sleeves!
Zed (: