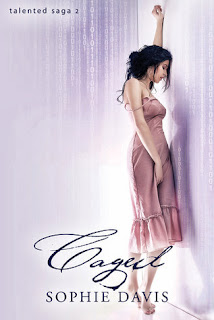 After her brush with death at Ian Crane’s compound, Talia Lyons feels like a prisoner, confined in her childhood home. Plagued with seizures- the result of an unidentified drug injected in her neck by Crane’s men- Talia must put her dream of becoming a Hunter on hold. So when Agency Director McDonough asks Talia to go undercover at the School for the Talented, to find the spy who set the trap for her in Nevada, Talia jumps at the opportunity.

Soon she learns that her new-found freedom comes with a price- working with Donavon on a daily basis. As if that isn’t awkward enough, her former teammate, Erik, also shows up at the School. But at least Talia has the unexpected company of her best friend Penny; to not only assist her in uncovering the spy, but also to deal with the complications that the guys create.

As Talia becomes more entrenched in her assignment, she quickly learns the lengths that the Agency and Mac will go in the name of war. With Crane’s influence spreading, Talia learns that there are few Operatives without ties to the Coalition. Forced to face hard truths and dangerous conclusions, Talia realizes that it is those closest to her who are hiding the biggest secrets. As the task of finding the traitor becomes more problematic, desperation and frustration rule Talia’s world. It becomes clear that Talia can’t do this alone. But who can she trust, when everyone around her is lying?

*I received a free ecopy of this book in exchange for an honest review.*
Following on from the first book in the series, we see that Natalia is living with the McDonough's ever since her disastrous capture by Ian Crane on her solo mission. Since Talia was captured and did not complete her mission, she did not qualify as being a Hunter, but to top things up, it seems that whatever Crane's men injected her with is causing Talia to have seizure, hence why the director, Mac, is adamant on keeping Talia in his house and refusing to allow her contact with anyone else.

Talia's relationship with Mac strains because he is being so overprotective of her, not allowing her to leave his house until they find the cure to her seizures. However, Mac is sure that there is a spy in their midst, which is why he sends Talia to work at the school as an assistant to his son Donovan, who happens to be Talia's first boyfriend. Seeing as Talia hates Donovan for cheating on her, their constant and petty arguments makes the story more interesting. Soon enough, Talia realises she finds comfort in Donovan's daily presence.

Penny, Talia's best-friend is also working closeby, which makes Talia feel even better, even though her mood swings are becoming more frequent and aggressive. Talia's mission is to find the spy by getting to know the suspect instructors, but she cannot seem to find anything that makes her suspicious of someone as the spy.

Soon enough, Erik and Henri come to the school for the Talent fair, and Talia is confused between her feelings for Erik, and the comfort Donovan provided. Plus, she begins to doubt the TOXIC agency's values, especially what lengths Mac is willing to go to.

Caged was a lovely second book, and I was constantly trying to think who the spy was. At the end, we find out who leaked Talia's mission so that Crane could find her, and it was a real shocker. No spoilers, so read the book to find out more!

"Overload of emotions? But we just kissed," I said, confused. I thought back to the night on the ledge. Erik was right; he did overstimulate me. I smiled at the thought. Erik was going to have to learn patience. Where was Erik? I frowned. If he was the reason that I was now in a hospital bed, hooked up to an IV and a breathing machine, the least he could do was sit by my sickbed. A serious talk about his priorities was in our future.

"You can thank me by abiding by the rules set in place." Mac rolled his eyes in a rare show of normalcy. He never did something so human. The gesture told me that he knew the chances of getting me to follow Toxic protocol in the future were slim. While I hated that people begrudged me his special treatment, I rarely let that stop me from taking advantage of it.
Posted by Zed at Saturday, October 05, 2013