Review of The Fiery Heart

The Fiery Heart
(Bloodlines #4)
By Rachel Caine
About: 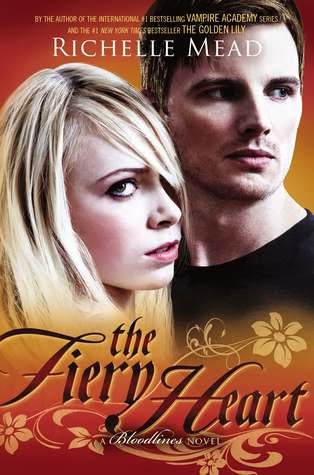 Sydney Sage is an Alchemist, one of a group of humans who dabble in magic and serve to bridge the worlds of humans and vampires. They protect vampire secrets - and human lives.

In The Indigo Spell, Sydney was torn between the Alchemist way of life and what her heart and gut were telling her to do. And in one breathtaking moment that Richelle Mead fans will never forget, she made a decision that shocked even her. . . .

But the struggle isn't over for Sydney. As she navigates the aftermath of her life-changing decision, she still finds herself pulled in too many directions at once. Her sister Zoe has arrived, and while Sydney longs to grow closer to her, there's still so much she must keep secret. Working with Marcus has changed the way she views the Alchemists, and Sydney must tread a careful path as she harnesses her profound magical ability to undermine the way of life she was raised to defend. Consumed by passion and vengeance, Sydney struggles to keep her secret life under wraps as the threat of exposure — and re-education — looms larger than ever.

Pulses will race throughout this smoldering fourth installment in the New York Times bestselling Bloodlines series, where no secret is safe.


My Thoughts:
The story continues in this fourth book from the Bloodlines series. Adrian and Sydney’s love goes through the rollercoaster of ups and downs, made more difficult by Zoe; Sydney’s younger sister and new alchemist. Zoe has all the fears of dhampirs and morois that Sydney dealt with when coming to Palm Springs, considering them as evil monsters, which doesn’t help matters when her sister is secretly dating one of them.


To make matters worse, their parents are getting divorced and unbeknownst to Zoe and her father, Sydney wants to take her mother’s side. The friction between the sisters steadily increases, right until the very end. Zoe’s actions make me despise her, particularly the ending; no spoilers!


Sydney’s practice in magic and her sessions with her History teacher continue, and she makes a breakthrough with her ink so that the Alchemist’s compulsion can be overridden. Meanwhile, another breakthrough is made in combatting the Strigois, which I’m sure will be vital in the next part of the series.


I loved how The Fiery Heart was told from both Adrian and Sydney’s point of views. Adrian was as charming as ever, but I feel he’s lost most of his bad-boy quality now that Sydney has reformed him and because he’s in love with her. Oh well, all good things must come to an end right?


“You don’t have to go if you’re afraid,” I said. There was probably nothing else I could’ve said that would’ve motivated her more. She was driven to become a super Alchemist, largely to impress the Sage father, who, I’d concluded after many stories, was a major asshole.
“Everything’s fine. Maybe it wasn’t as heavy as you thought.”
“It was pretty heavy,” Rowena said, but relief filled her face. I even thought I caught a glimmer of tears in her eyes as she looked at me. “I guess you just got the block off fast enough.” There was no sign that she remembered the burst of healing.
"Because I’m manly and brave,” I said solemnly.


A sly smile crossed Rose’s lips. “I think Nina likes you. Maybe you could look her up the next time you’re at Court. Would do you good to settle down.” It was a dangerous comment, considering our past, but it no longer bothered me.
“What, and disappoint all the women of the world? How cruel do you think I am?”


“What are you doing?” demanded Wesley.
“Practicing my treejitsu skills. You’ve probably never heard of it, but believe me, it’s enough to knock you on your ass and wipe that smug look off your face.”


“She probably doesn’t want to bother you since you’re so busy,” I said. “Aren’t you failing English?”
Angeline flushed. “It’s not my fault.”
“Even I know you can’t write an entry on Wikipedia and then use it as a source in your essay.” Sydney had been torn between horror and hysterics when she told me.
“I took ‘primary source’ to a whole new level!”


“Escape plan number seventy-three,” I said. “Open a pancake restaurant in Sweden.”
“Why Sweden?"
“Because they don’t have pancakes there.”
“They do, actually.”
“Well, then, it looks like we’ve got our market already in place.”
Posted by Zed at Wednesday, January 29, 2014