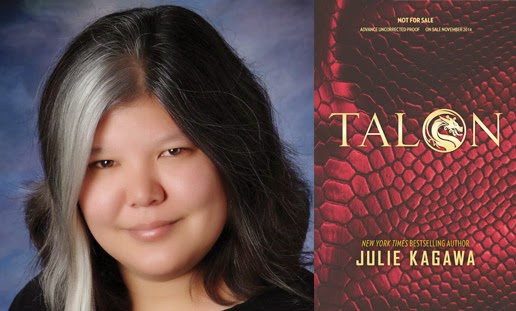 Long ago, dragons were hunted to near extinction by the Order of St. George, a legendary society of dragon slayers. Hiding in human form and growing their numbers in secret, the dragons of Talon have become strong and cunning, and they're positioned to take over the world with humans none the wiser.

Ember and Dante Hill are the only sister and brother known to dragonkind. Trained to infiltrate society, Ember wants to live the teen experience and enjoy a summer of freedom before taking her destined place in Talon. But destiny is a matter of perspective, and a rogue dragon will soon challenge everything Ember has been taught. As Ember struggles to accept her future, she and her brother are hunted by the Order of St. George.

Soldier Garret Xavier Sebastian has a mission to seek and destroy all dragons, and Talon's newest recruits in particular. But he cannot kill unless he is certain he has found his prey: and nothing is certain about Ember Hill. Faced with Ember's bravery, confidence and all-too-human desires, Garret begins to question everything that the Order has ingrained in him: and what he might be willing to give up to find the truth about dragons.

I would have given Talon four out of five stars, until the very ending when it transformed into an unmistakable five star read! No spoilers but wow and WOW! I can't say it was as good as the Iron Fey series by Julie Kagawa but it sure is a series worth following. The ending had me on the edge of my seat with the sky high level of action and drama! At one point I was actually speaking to the characters aloud, until I realised that talking to a kindle isn't a good sign at the best of times.

The storyline itself was fairly predictable; St George's soldiers and Talon's dragons are sworn enemies so when Ember, a hatchling meets Garrett, the Dragon slayer, it was pretty obvious they would fall in love. What wasn't so obvious was when slowly they both uncover secrets of the organisations that they've devoted their lives to. Ember and Garrett discover that their life-long beliefs might not be accurate, and the facts they have about their 'enemies' are no longer crystal clear.

Garrett realises that not all dragons are merciless and inhumane, incapable of feelings and emotions, as the order of St George has led him to believe. Likewise, Ember finds out that Talon might not be such a honourable Dragon organisation to work for, especially if they don't even spare her own kind.

My pet peeve with this book was that we're thrown into this 'summer break' that Ember and Dante are on, but we know very little about what they did beforehand. Why is Dante so susceptible to Talon's brainwashing, but Ember isn't, especially when they've always trained together? And what exactly was Talon training them for earlier. It would have been nice to understand their history a leeetle bit more.

There are a number of fascinating characters in Talon so I'll share the one I was most fond of, aside from Ember and Garrett of course. Riley, the Rogue dragon had to be my favourite. His blunt-bad-ass-occasionally-overconfident-but-sexy attitude confuses Ember. She's in love with Garrett the human, but the dragon side of her has an unmistakeable pull towards Riley. I am most interested in how their relationships progress since I suspect she's beginning to fall for both!

Ember's brother is beyond irritating. All I'm going to say is what an idiot!

In Talon, loyalties are tested, secrets are revealed but will the truth be enough to save their love? Especially because it doesn't matter how human Ember might seem to be, deep down she is a Dragon.

I rolled my eyes. The "blasted hurry" was that I rarely had any time that was truly my own. They wanted me to sit, listen, learn, be quiet, when I wanted to run, shout, jump, fly.


"Get off me," I growled, pushing at his chest. Don't shift, Ember. If you Shift and eat this troll, Talon will lock you away for the rest of your life. Plus, you'd probably get food poisoning.

"...Everyone slips up, makes a mistake. We just have to be there when they do."

"I've decided it's your fault. You're very distracting." I cocked my head. "Good distracting or bad distracting?" "I'm not sure yet." "Well, when you figure it out, let me know. I'll be sure not to care very much."

"So, if you're going to stand there and tell me we're done, because heaven forbid you actually feel something, then I'm afraid I'm going to have to call bullshit.

"Oh, sure," I heard Wes mumble as I left the room. "Don't want to worry the bloody hatchlings, but the human's heart exploding from stress, that's perfectly okay."

Email ThisBlogThis!Share to TwitterShare to FacebookShare to Pinterest
Labels: adventure, books, Dragons, YA