Review of Between the Devil and the Deep Blue Sea 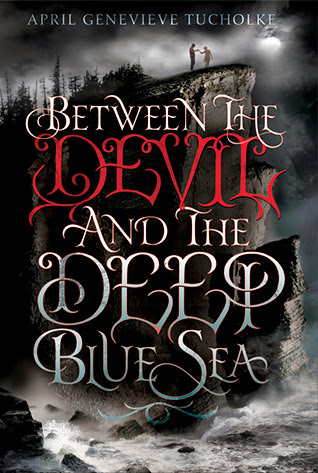 You stop fearing the devil when you’re holding his hand…

Nothing much exciting rolls through Violet White’s sleepy, seaside town… until River West comes along. River rents the guest house behind Violet’s crumbling estate, and as eerie, grim things start to happen, Violet begins to wonder about the boy living in her backyard.

Is River just a crooked-smiling liar with pretty eyes and a mysterious past? Or could he be something more?

Violet’s grandmother always warned her about the Devil, but she never said he could be a dark-haired boy who takes naps in the sun, who likes coffee, who kisses you in a cemetery... who makes you want to kiss back.

Violet’s already so knee-deep in love, she can’t see straight. And that’s just how River likes it.

Blending faded decadence and the thrilling dread of gothic horror, April Genevieve Tucholke weaves a dreamy, twisting contemporary romance, as gorgeously told as it is terrifying—a debut to watch.

I wrote and published this review agesss back, but for some reason it had reverted to a draft :S Weird...anyway, if you haven't read this already, here goes!

Seriously creepy; the perfect read on a cold, dark night. Normally I stay away from horror stories as such, and I prefer paranormal romances and although I wouldn’t classify this book as horror, it was definitely scary and gave me the chills. This story is full of mysteries, disappearances and secrets that I couldn’t help but tremble as I turned the pages.

The story is about two twins, who live in a run-down mansion. Violet and Luke's family used to be rich, but their parents have spent most of the inheritance on their travels and artistic temperaments. Although their parents are never around, Violet truly felt loss of a family member when her grandmother passed away not long ago, and it's only Freddie she actually misses because Freddie was more of a parent than anyone else. Violet is rather odd in that she wears her dead grandmother's clothes, but her oddness was rather enduring.

The twins have a love-hate relationship, mostly dislike, and are forced by circumstance to take care of each other. Luke finds his sister weird, especially her tendency to wear their dead grandmother's clothes, and Violet finds Luke's rude, sexist nature demeaning.

Money is running low, and there's no sign of their parents so she decides to rent out the guest house. And along comes River West. He appears to be the typical mysterious bad boy but strange things happen when River comes to town, and there's more 'bad' to him than first meets the eye.

The characters were very realistic, I loved and hated River at the same time, and felt sorry for him, especially at the end when the truth comes out. River's logic of justice and wanting to use his gift to punish those that deserve it, makes sense in a weird way. Yes, he's not going about it in the right way but it was more real this way. Heroes are so overrated anyway. Plus, the origami money animals that he gifted to Violet when he knew she needed money were a cute touch!

The creepiest parts are at the end and there were chapters when I was on edge, not entirely sure who would live and who would die, but you will need to read the book to find out more!

And what she found was God. God, and the Devil. Because one didn't exist without the other.

'Violet, Violet. You curl up next to me, nap and leave. What is this, some sort of one-nap stand?' He smiled. 'Screw the movie. Get back over here.'
I laughed. 'You said you wanted to go. You said Casablanca was one of your favourite films.'
'I was sleeptalking when I said that. It's like sleepwalking, except you do it with your mouth.'

Then Luke stretched out his leg and kicked me in the shin. 'God. Please tell me you don't go around saying crap like that to everyone. No wonder no one in town ever talks to us. Wealthy families always have a crazy person or two. Is that really the role you want to play, Vi?'

'...It's easier to forgive someone for scaring you than for making you cry.'

'Yeah. I know, River. But at some point you're going to have to learn how to deal with injustice, like the rest of us non-glowers. It's part of life. You can't punish everyone.'
'I can try.'

Freddie often told me that you've got to be happy when you can, because life won't wait for you to take the time.

What I felt, though, deep, deep down in the darkest dark of my heart, was that I didn't give a damn if River was evil. I still liked him.
Maybe I even kind of loved him.
And maybe that made me wicked too.
Posted by Zed at Friday, November 14, 2014