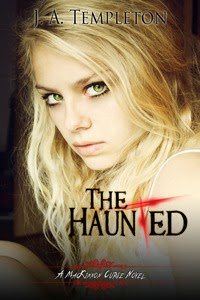 About:
After battling a malevolent ghost that held the spirit of her friend Ian MacKinnon bound to the land for two hundred years, sixteen-year-old reluctant psychic, Riley Williams, felt as if she was finally easing into her new life in Scotland.

Or so she thought.

Laria, the spirit of the witch who had cursed Ian wants revenge for Riley’s interference and she’s bringing along friends—dark entities who thrive on evil.

The one bright spot in Riley’s world is Ian’s descendent, Kade MacKinnon, who could easily be Ian’s modern day twin. The parallels between the two guys are undeniable. As Riley’s relationship with Kade blossoms, she begins to realize Laria has grown in her power since their last confrontation—a power that could very well manipulate the living just as effectively as the dead.

At the end of the last book we see Ian’s spirit passing on to the ‘other side’ once Riley finds Laria’s journal and breaks the curse. Riley is heartbroken but can’t exactly tell anyone that her ghost boyfriend has now left and so tries to grieve silently. Soon after, two of the younger MacKinnon’s return to school from holiday; Kade and Cait. Kade’s resemblance to Ian both physically and emotionally shocks Riley, but they get along immediately.

Their immediate attraction infuriates Laria, the evil spirit, who has also returned, albeit in spirit form. This time Laria is even more evil and dangerous than before, furious that Ian’s soul has returned and that he’s back with Riely. Laria manages to hurt Riley and her family in a number of ways, often not caring about having an audience.

Kade feels a connection with Riley but he has no idea that Riley can see ghosts, that she was in love with his ‘ancestor’ ghost Ian or that Riley cuts. In this way Kade is different to Ian because Ian knew all Riley’s secrets, mostly because he could spy on her!

This book was scarier than the first because Laria possessed quite a few people, and physically hurt Riley on several occasions. Plus there are other dark spirits around that are trying to cause trouble. Hopefully in the third book we’ll finally see Riley able to protect herself in some way, rather than getting hurt or being saved by friendly spirits.

Despite the fact that Kade was at practice, which was a relief in itself, I had to be sure not to say anything or let on that this wasn’t my first visit to their home. It’s not like I’d blurt out, “Hey, I’m the one who broke into your home while you were on holiday to perform a ritual to free your ancestor Ian from a curst put on him by a dead, but very evil witch.” Yeah, that’d go over so well.

Tempers ran high, especially in the city where everyone was in a hurry to get where they were going. It didn’t matter if you were halfway around the world. People were people.

At least I was having a good hair night. I couldn’t say the same for Dana, who had gone with an updo that made her nose look bigger. “There are mean spirits everywhere...just as there are mean people everywhere. A person doesn’t change who they are when they die. If an earthbound spirit was cruel in life, then that spirit would be cruel in death.”

I knew too well the feeling of having someone you care about die. A piece of you dies with them.