Review of The Distance Between Us

The Distance Between Us 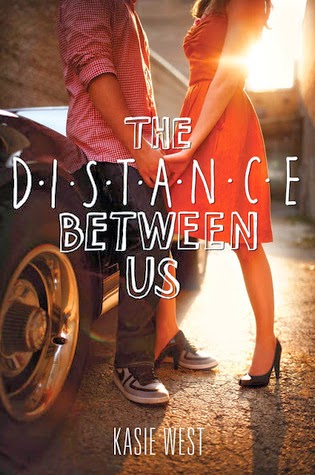 About:
Seventeen-year-old Caymen Meyers studies the rich like her own personal science experiment, and after years of observation she’s pretty sure they’re only good for one thing—spending money on useless stuff, like the porcelain dolls in her mother’s shop.

So when Xander Spence walks into the store to pick up a doll for his grandmother, it only takes one glance for Caymen to figure out he’s oozing rich. Despite his charming ways and that he’s one of the first people who actually gets her, she’s smart enough to know his interest won’t last. Because if there’s one thing she’s learned from her mother’s warnings, it’s that the rich have a short attention span. But Xander keeps coming around, despite her best efforts to scare him off. And much to her dismay, she's beginning to enjoy his company.

She knows her mom can’t find out—she wouldn’t approve. She’d much rather Caymen hang out with the local rocker who hasn’t been raised by money. But just when Xander’s attention and loyalty are about to convince Caymen that being rich isn’t a character flaw, she finds out that money is a much bigger part of their relationship than she’d ever realized. And that Xander’s not the only one she should’ve been worried about.

This is one of the books I’ve been meaning to read but just didn’t get round to it. And now that I have, I can’t believe it took me this long!


A contemporary love story about a rich guy and a poor girl, their differences, and how they still manage to fall in love. Yes, that sounds like every other cliché in love stories but it’s got some twists, and the way its written sets it far apart than all the other ‘normal’ love stories.
Caymen and Xander (love the names) meet at the Doll shop that Caymen’s mother owns. One day, a wealthy, young guy (Xander) walks in to buy a collectible doll for his grandmother. Caymen has worked at “Dolls and More” for as long as she can remember, and she lives in the apartment above the store with her mother. She hates working there but she has to help her mother to make ends meet.
Caymen’s sarcastic and dry humour intrigues Xander, and Caymen sees that Xander isn’t like all the other wealthy guys her mum has always told her to stay away from, and they may have more in common than she thought.
Loved this book, and the witty comments. I’m looking forward to reading lots more by Kasie West.


Favourite Quotes:
Skye laughs. “She has a life, Henry. It’s just a boring one.”
“Considering I’m with you half the time, Skye, I’d watch what you say.”
“Caveman has a boring life,” he sings. “She needs some toil and strife.”
“No, I’m fine with boringness, thank you.” In fact I’ve settled into my monotonous life pretty well, only feeling the urge to rip my hair out about once a week now.


“You told me to try to get her to buy one we already had.”
“Not at the expense of her feelings.”
“Feelings don’t cost anything. Dolls do.”
She offers me a small smile and then runs a hand down my cheek. “Feelings, my dear daughter, you will perhaps learn one day, can be the most costly thing in the universe.”
And that’s the kind of attitude that is going to be the financial ruin of the store.


“Yeah, well, I’m over him.”
“That was fast.”
“That’s because I’ve been trying to get over him since the minute I met him so I’m one step ahead of myself.”
She pats my knee like she thinks I’m in denial. I am not in denial.

“I’ve needed my morning hot chocolate, but someone got me addicted to it then took it away.”
“Is that your subtle way of saying you missed me last week?”
“I’ve missed hot chocolate. I just think of you as the guy who brings it to me. Sometimes I forget your name and call you hot chocolate guy.”


He lifts a hand to my elbow, “Are you okay?”
I meet his eyes and want to say, “No, I still feel like crap. My mom is keeping secrets, I’ll probably be homeless in a month, my dad ran out on me, and you have a girlfriend we’re both pretending doesn’t exist.”


“And the winner is Xander.”
“Cheaters! The both of you!”
He clears his throat. “I’d like to dedicate this win to my supreme knowledge of the kitchen layout and tools therein that I have used on many occasions. If it wasn’t for-“He stops mid-sentence and then says, “Oh, hi, Mom.”


“I feel guilty and selfish for wishing a person out of existence but I don’t want this change.”
“You’ll work through those feelings. You’ll melt when you hold the baby in your arms.”
“No, I won’t. I don’t like kids and kids don’t like me. We’ve come to this general consensus long ago.”


“What am I looking at?”
I slip outside and he follows. “I need to find out everything there is to know about that guy.”
“Okay...what do we know so far?”
“Nothing.”
He clears his throat. “Miss Scientific Observer has no concrete facts?”
“I have a feeling.” That if my mom is pregnant I need to know everything I can about the potential father.
“Do feelings prove theories now?”
“Shut up.”

“What’s wrong, babe?” Xander grabs my hand and puts it on his knee.
“Is that the pet name we’re going with? Babe?”
He backs out of the parking stall and starts driving. “You don’t like it?”
“It’s okay. It makes me think of the pig, though.”
“Are you putting in a request, then?”
“I’ve always been partial to sweetie, mostly because I’m not sweet so it makes me laugh.”

“What is it about me your mom doesn’t like?”
“Mainly that you’re rich. If you could just change that one thing, it would make my life a whole lot easier.”
“I’ll work on that.”
“Thanks. You’re so accommodating.”
Posted by Zed at Saturday, March 22, 2014