Review of the Messenger 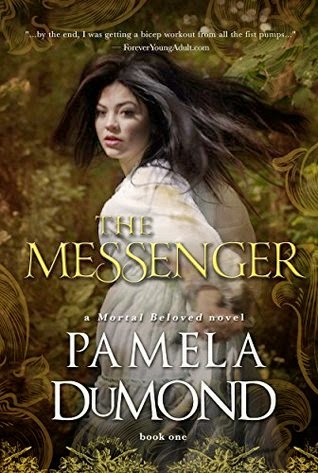 Do you remember the first time you fell in love? Read The Messenger (Mortal Beloved, Book One) and feel that beautiful—again. Sixteen-year-old Madeline’s meant to fall in love with Samuel in every lifetime. But she meets him for the first time when she accidentally time travels into the past—hundreds years before she’s even born! Their relationship is forbidden—Samuel’s half Native, Madeline’s white. Every rendezvous they share must be secret. Each moment they spend together tempts the odds that they’ll be discovered and brutally punished. But their love is fated—they musk risk all. Danger intensifies when Madeline learns she’s in the past not only to fall in love, but also to claim her birth right as a Messenger—a soul who can slip through time’s fabric at will. Deadly Hunters, dark-souled time travelers, crave Madeline’s powers and seek to seduce or kill her. Can Madeline find her way back to the future in time to save herself and Samuel?

Nah, this wasn't another dream. Just a continuation of my previous nightmare.

"Oh." It seemed being labeled different wasn't trouble-free in any year. People would make your life a living hell in the year I came from. But in the year 1675, they would torture and kill you.

I was in my pilgrim underwear. These were definitely not Victoria's Secrets-more like Victoria's Rejects. They were hideous, fluffy pajamas with a big girdle around the middle. The girdle, called a corset, was most likely damaging my organs, and I was done with it.

"Sa means forever. Infinity. Some souls meet. They fall into hate, or crash into love and chase after each other, through different bodies and lifetimes. They are meant to be together, but they must first learn lessons in order to figure out how to do that," Angeni said.

Just get on with it, I thought. Tell me the next thing I have to practice, or say, or do, or attempt to become a Messenger. Don't flirt. Please don't mess with my heart.

I felt like I was falling. But for once, falling was a good thing.