Review of The Iron Knight 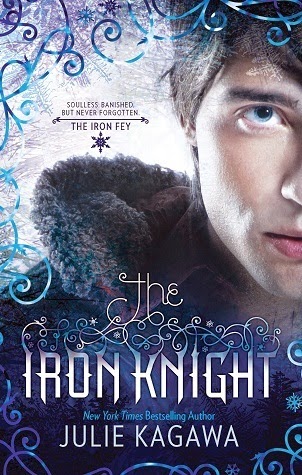 
My name - my True Name - is Ashallayn’ darkmyr Tallyn. I am the last remaining son of Mab, Queen of the Unseelie Court. And I am dead to her. My fall began, as many stories do, with a girl…

To cold faery prince Ash, love was a weakness for mortals and fools. His own love had died a horrible death, killing any gentler feelings the Winter prince might have had. Or so he thought.

Then Meghan Chase - a half human, half fey slip of a girl - smashed through his barricades, binding him to her irrevocably with his oath to be her knight. And when all of Faery nearly fell to the Iron fey, she severed their bond to save his life. Meghan is now the Iron Queen, ruler of a realm where no Winter or Summer fey can survive.

With the unwelcome company of his archrival, Summer Court prankster Puck, and the infuriating cait sith Grimalkin, Ash begins a journey he is bound to see through to its end - a quest to find a way to honor his vow to stand by Meghan's side.

To survive in the Iron Realm, Ash must have a soul and a mortal body. But the tests he must face to earn these things are impossible. And along the way Ash learns something that changes everything. A truth that challenges his darkest beliefs and shows him that, sometimes, it takes more than courage to make the ultimate sacrifice.
Source: Goodreads
My rating: 4.3 / 5

I only gave this book 4 rather than the 5 stars that I normally give to the Iron Fey series, but it was an incredibly close call. In the Iron Knight we see the story from Ash’s point of view as he sets out on a journey to the end of the world in order to become human. He is accompanied on this adventure to obtain a soul by none other than Puck and my personal favourite, Grimalkin. The Big, Bad Wolf of legends accompanies them, as does the one and only, Ariella! Yes, she is alive, well, sort of. She is now a Seer, but her gift/curse and the time she’s lived alone has changed her. I can see why the boys loved her, but throughout the book she felt like a ghost more than a girl to me. She was always so practical, and clear-minded, it felt like she didn’t have a personality and she was an echo of the Ariella they once knew.

In every book so far, we meet at least one character besides Puck and Grimalkin, that bring the element of humour to the story. This book was darker than the others so it was only fitting that the humour from the Wolf was dark too. I loved the banter between Grimalkin and the Wolf, the constant insults and near-death threats. It sounds ominous, but it made this story lighter to read. Puck and Ash have their own ups and downs but as the Iron Fey series progresses, I feel that their relationship improves too. Who knows, they might even be almost-friends soon?

I was sad that there was less of Meghan in The Iron Knight than the other books but it made sense as this book was about Ash and his journey. We see some of the demons of his past, his fears and basically the downfall of what being a human means. It actually made me reconsider his whole ‘I need a soul’ mission, because the problems of being human were rather depressing to say the least (Mortality consists of old age, sickness, a guilty conscious and a very fragile body; who would want to give up immeasurable strength, winter glamour and immortality for these problems?). Ash might be the reserved, cold type, but his love for Meghan is epicly sweet. I thought he was going to waver when he realised Ariella was still alive, and again when he sees a possibility of his future mortal death, but he remained strong and devout. *sigh*

This book was definitely different to the others, and in a way, even though the story was darker, it was more romantic too. Ash literally went through hell and back to find a way to be with Meghan, if that’s not true love (and insanity) then what is?


“You know,” Puck said, panting slightly, “this reminds me of the time we were underground and stumbled into that Duergar city. Remember that, ice-boy?” I parried a blow to my ribs and returned with a swipe to my opponent’s head, forcing him back a step. “Stop talking and keep fighting, Goodfellow.” “Yeah, I think you said that to me then, too.”

She frowned and looked at us both. “Are you friends?” I snorted. “I wouldn’t go that far.” “Oh, best friends, lady,” Puck said at the same time, giving her a wink. “Ice-boy will deny it until the mountains crumble, but you know how hard it is for him to admit his feelings, right?”

“...We were born from their dreams, their fears and imaginations. We are the product of their hearts and minds. Without a soul we are immortal, yet empty. Remembered, we exist. Forgotten, we die. And when we die, we simply fade away, as if we never existed at all. To become human is to have a soul. It is that simple.”

“Although, I will issue this one warning. If I end up in the river because some idiot decides to rock the boat-“ he flattened his ears at Puck, who gave him a wide-eyed look of innocence “-I know several witches who would be happy to bring down a particularly potent curse on said idiot’s head.”

I shrugged. “I know my abilities. Why should I fear something that probably can’t kill me?”

I shot the Wolf a cold stare. “What do you think?” He bared his fangs at me. “Be careful, boy. In some tales, the hero gets eaten by the monster after all.”

“We are gathered today,” he began in a lofty tone, “to witness the joining of these two in the completely useless, ostentatious ceremony of marriage. For reasons beyond me, they have decided to make their love official, and-“ “Grimalkin.” Meghan sighed, though she wore a faint, exasperated smile. “Just this once, could you please not be an ass?”

“...That is the price of mortality. You will die, and you will die alone.”