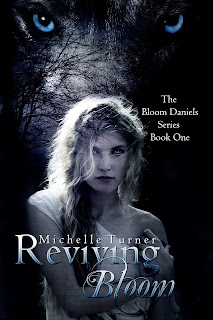 Bloom was abandoned by her mother at birth, but thanks to her dad she never once felt unloved. When he is killed in a car wreck, leaving her without any close family, she spends a year mourning him. She feels as if her heart has been cut out of her chest and nothing is left but an empty hole that she doesn’t think will ever heal. Then one night after work she finds a wounded dog in the woods behind her house and takes him in, not realizing he’s more than just some stray dog but a wolf shifter, who happens to be her mate.

Pike is getting over the loss of his father by running full force away from his responsibilities. He’s getting ready to go back to face his new position as the Alpha of his pack when he catches the scent that can only belong to his mate.

When Bloom finds out she may not be the normal human she always thought herself to be, she’s forced to search out the woman who abandoned her at birth

The book's beginning was sad but intriguing; a year after her dad’s death, Bloom is still grieving. That is until Pike arrives, smelling Bloom’s strawberry and cedar scent and thereby changing Bloom's entire life. It was very entertaining to find Bloom happy with this dog/wolf, when in fact the animal was a shifter, who also happened to be Bloom’s mate.


Chapter’s alternated between Bloom and Pikes’ thoughts and perspectives, which I found useful because it allowed us to hear not just Bloom’s thoughts, but also the wolf’s too. This was most helpful when Pike was in his wolf form and had not yet shifted so was acting as Bloom's 'pet'.


Once Pike shifts into his human form they are both already in love. I found their constant ‘darlings’ a bit too mushy, but I know that’s just me, anyone else would find it sweet!


The story has quite a few interesting surprises, particularly when we realise that Bloom has the shifter gene but for an unknown reason Bloom has not yet shifted. In addition, Bloom has another gift of 'gut instincts' and knowing things intuitively, without a logical explanation. Since this is a series, I believe we will find out more about Bloom’s gifts when she meets her great-aunt in the next book.


My favourite character had to be Bloom’s best friend; Bonnie. Fiercely loyal, and incredibly sweet, she made me laugh at the way she mocked Pike and his shifters by calling them dogs, rather than shifters. AT the end of the book it appears that the pack’s Beta has mated with Bonnie, but the feelings are one-sided since Bonnie is appalled by the news. I look forward to seeing how long before she gives in to the mating bond!


Overall, a fun read, which gave me much more insight to shifters than I had before. The addition of a psycho stalker, evil brother and unknown gifts, makes this book a recommended read.