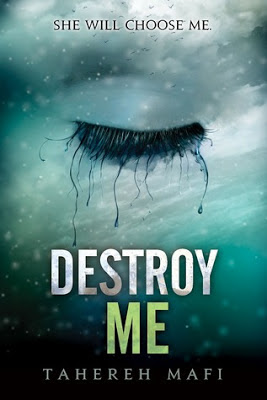 Perfect for the fans of Shatter Me who are desperately awaiting the release of Unravel Me, this novella-length digital original will bridge the gap between these two novels from the perspective of the villain we all love to hate, Warner, the ruthless leader of Sector 45.

In Tahereh Mafi’s Shatter Me, Juliette escaped from The Reestablishment by seducing Warner—and then putting a bullet in his shoulder. But as she’ll learn in Destroy Me, Warner is not that easy to get rid of. . .

Back at the base and recovering from his near-fatal wound, Warner must do everything in his power to keep his soldiers in check and suppress any mention of a rebellion in the sector. Still as obsessed with Juliette as ever, his first priority is to find her, bring her back, and dispose of Adam and Kenji, the two traitors who helped her escape. But when Warner’s father, The Supreme Commander of The Reestablishment, arrives to correct his son’s mistakes, it’s clear that he has much different plans for Juliette. Plans Warner simply cannot allow.

Set after Shatter Me and before its forthcoming sequel, Unravel Me, Destroy Me is a novella told from the perspective of Warner, the ruthless leader of Sector 45

I had heard much about Tahereh Mafis books but have not had a chance to read them until I realised she has also written a novella.

I did not expect to enjoy a novella especially when it is based on a series I know nothing about. But after reading this I am definitely going to read the novels in the series to find out more about Juliette; the girl with the fatal touch.

I'm assuming there was a novel before this novella which would explain more about why J is classed as insane when  she does not seem to be a threat.  But im more interested in reading the novel after,to see what happens when Warner finds J and if J manages to control her "abilities".

I particularly enjoyed reading Js journal entries because it gave an insight into what was going on in her head and shows how vulnerable this supposed monster really is.

Very much looking to read more in this series. I can see why Tahereh Mafi is so popular!
Favourite Quotes:
It's a strange thing, to never know peace. To know that no matter where you go, there is no sanctuary. That the threat of pain is always a whisper away.
She put my hand in the fire once.
Just to see if it would burn, she said. Just to check if it was a regular hand, she said.
I was 6 years old then.
I remember because it was my birthday.
"Let their fates serve as an example to you. We do not welcome traitors in The Reestablishment. And we do not forgive."
This girl is destroying me.
A girl who has spent the last year in an insane asylum. A girl who would try to shoot me dead for kissing her. A girl who ran off with another man just to get away from me.
Of course this is the girl I would fall for.
I pretend and pretend until the world becomes so breathtaking behind my eyelids that I can no longer contain it. But then my eyes fly open and I'm caught around the throat by a pair of hands that won't stop suffocating suffocating suffocating.
My thoughts, I think, will soon be sound.
My mind, I hope, will soon be found.
Seamus Fletcher was murdering his family. And I shot him in the forehead because I thought it'd be kinder than ripping him to pieces by hand.
I've come to believe that the most dangerous man in the workd is the one who feels no remorse. The one who never apologizes and therefore seeks no forgiveness. because in the end it is our emotions that make us weak, not our actions.
And I'm eager for any opportunity to snap Kent's neck,
That traitorous bastard. The idiot who thinks he's won himself a pretty girl. He has no idea who she is. No idea what she's about to become.
And if he thinks he's even remotely suited to match her, he's even more of an idiot than I gave him credit for.
And yet I've known nothing like this terrible, horrible, paralyzing feeling. I feel crippled. Desperate and out of control. And it keeps getting worse. Every day I feel sick. Empty and somehow aching.
Love is a heartless bastard.
I'm driving myself insane.
We're running out of time, he said.
As if time were the kind of thing you could run out of, as it were measured into bowls that were handed to us at birth and if we ate too much or too fast right before jumping into the water then our time would be lost, wasted, eaten up, already spent.
But time is beyond our finite comprehension. It's endless, it exists outside of us; we cannot run out of it or lose track of it or find a way to hold on to it. Time goes on even when we do not.
Posted by Zed at Tuesday, June 18, 2013