Review of The Wrong Girl 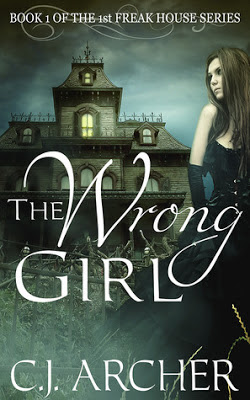 About
It's customary for Gothic romance novels to include a mysterious girl locked in the attic. Hannah Smith just wishes she wasn't that girl. As a narcoleptic and the companion to an earl's daughter with a strange affliction of her own, Hannah knows she's lucky to have a roof over her head and food in her belly when so many orphans starve on the streets. Yet freedom is something Hannah longs for. She did not, however, want her freedom to arrive in the form of kidnapping.

Taken by handsome Jack Langley to a place known as Freak House, she finds herself under the same roof as a mad scientist, his niece, a mute servant and Jack, a fire starter with a mysterious past. They assure Hannah she is not a prisoner and that they want to help her. The problem is, they think she's the earl's daughter. What will they do when they discover they took the wrong girl?


Loved the unusualness of it. The book is set in what I like to call the 'prim and proper' British era. Where servants and maids are regular to households, ladies need chaperones and where it's scandalous to speak to someone without an introduction. I love reading about this time because the society is so different. At the same time the characters were portrayed to be so realistic that it did not feel that I was reading about the past. I felt like I was there, with Hannah whilst she was stuck in the attic, arguing with her governess, training with Jack in the Freak House...

I seriously did not think it would be Hannah who was the fire-starter, mainly because I never thought Vi would lie to her all her life like that. But why would Vi do that because from what we know of Vi she is kind, timid and (generally) honest? I am beginning to suspect that there was a different motive for the Earl to keep both girls hidden in the attic. It cannot be just because Hannah is Vi's companion, there must be more to Hannah's history. Perhaps she is the real daughter? But even that does not make sense because why would they hide it from her. Another thing is, who is Vi's mother? All we know is that both girls are terrified of her...
Now that Hannah knows what powers she has access to, perhaps she may actually be able to control it now. It would be interesting to see what happens as the story progresses and whether there are any more hidden powers that the inhabitants of the Freak House possess.
Book 1 in the Freak House series was very entertaining and I look forward to reading more from C.J. Archer.
Zed (:

I felt Vi tense. Lady Wade, her mother, never visited us in the attic- something for which we were both grateful. It was enough to have to put up with ratty Miss Levine's moods. At least our governess had enough passion in her to grow angry on occasion. Lady Wade was simply indifferent to our plight, and that indifference made her as bleak as a February night.

"Good afternoon, Pearson," I said breezily. He hadn't addressed me, but sometimes, when I was feeling particularly irreverent, I cast aside the rules of propriety. I was, after all, a prisoner, a narcoleptic and a companion to a lady who started fires with her mind. Propriety was the least of my concerns.

"Do you think the appointment will take long?" Sylvia asked.
"Why?"
"We simply must go shopping. I'm not travelling all that way and not visiting Oxford Street."
Jack's eyes softened. "We'll certainly have time for shopping. Indeed, I can hardly wait. I live to carry your purchases up and down Oxford Street."
"Don't be silly. Tommy can carry the boxes to the carriage. You won't need to do a thing except pay..."

"I doubt I could ever be happy to be associated with Freak House."
Jack looked quite unnerved by her misery. "Those people aren't for the likes of us," he said quietly.
"You shouldn't let them bother you," I said to her. "I agree with Jack. They don't seem like the sort of people you'd want to be friends with anyway."
"That's easy for you to say. You and Jack are the freaks. I'm the freak by association. It's not fair."

What had I been thinking. "I'm so sorry, Samuel. I didn't know it would be like that. Those people...they're so...desperate."
"Starvation does that. You weren't to know what it would be like."
"I should have. I've read the stories of Mr. Dickens."
He laughed and patted my hand. "Then you are indeed a woman of the world."

"Dear lord," Sylvia said, sitting heavily on a chair "What if he intended to murder us in our beds?"
"I'm sure that wasn't his intention, Syl," Jack said.
Tommy puffed out his chest. "I'll protect you, Miss Langley."
"Thank you," she said. "I can rely on you if not my own cousin."

Tommy grinned. "It's a good plan, Miss Smith."
"And dangerous," Sylvia said.
"Thank you for your concern for my safety, Miss Langley, I'll be alright."
She sniffed. "I meant it would be dangerous for us alone."

Jack smiled ruefully. "I couldn't help myself. I'm so relieved you're all right."
"I'm rather glad you're alive too," I said and grinned. If I threw my arms around him, would we combust? I wanted to, so much, that I was almost prepared to try it.
"What about us?" Tommy said. "Aren't you glad your cousin and I are alive?!
"Would you like a kiss too?" Jack asked him.
Tommy sniffed. "Don't think that'll get you off. I'm bloody angry at you for going back in there for that monster."

"It was fortunate that you got the right girl in the end, Jack," Sylvia said cheerfully. "I'm certainlu glad we have Hannah and not the other one. She sounds like she can't be trusted if she was indeed part of Hannah's kidnapping" The fact that most of the people in the room had been part of my kidnapping seemed to have escaped her notice.