Out of Sight, Out of Time
(Gallagher Girls #5) 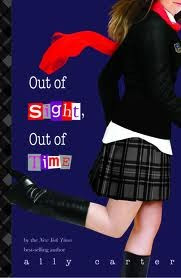 About:
The last thing Cammie Morgan remembers is leaving the Gallagher Academy to protect her friends and family from the Circle of Cavan-an ancient terrorist organization that has been hunting her for over a year. But when Cammie wakes up in an alpine convent and discovers that months have passed, she must face the fact that her memory is now a black hole. The only traces left of Cammie's summer vacation are the bruises on her body and the dirt under her nails, and all she wants is to go home.

Once she returns to school, however, Cammie realizes that even the Gallagher Academy now holds more questions than answers. Cammie, her friends, and mysterious spy-guy Zach must face their most difficult challenge yet as they travel to the other side of the world, hoping to piece together the clues that Cammie left behind. It's a race against time. The Circle is hot on their trail and willing stop at nothing to prevent Cammie from remembering what she did last summer.

My Thoughts:
This is by far, my favourite in the Gallagher Girls series. It's a lot more sinister, confusing and thrilling than the previous books. Gone are the days when the most important thing for Cammie Morgan was hiding her spy-life from her boyfriend Josh!

The last book ended with Cam realising that she needs to leave the academy and separate herself from all her loved ones to keep them safe as the Circle was after her and anyone protecting her would get hurt in the process. In this book we realise that Cam wakes up in a nunnery in the Alps and has lost memory of everything that happened for the last three months. And that's what the story focusses around; trying to find out where Cammie went, why and whether the Circle found her or not.

We see a lot more of Zach but he's more of the back-up crew than the hero who saves her. Preston Winters makes a re-appearance, as does Agent Townsend. I laughed over his and Abby's arguments the most, in fact I think that was the only humour in this book. Their clashing personalities and competitive natures lightened the atmosphere. So even though there wasn't as much light-heartedness in this book, it was still a excellent read!

"Stop looking at me like that," I told them when it finally became too much.
"Like how?" Liz asked.
"Like you didn't think you'd ever see me again," I said.
"Cam we-" Liz started, but Bex cut her off.
"You don't get it, do you?" Her voice was more hiss than whisper. "Until forty-eight hours ago, we didn't."

So I just looked down at my hands and admitted, "No one seems happy I'm back."
"You are back, Cam." Macey went into the bathroom and started to close the door. "Which means for the first time since you left, it's okay for us to be mad at you for leaving."

You might think in these situations the advantage lies with the grown man with the high-powered rifle, and not with the two teenagers in training.
Well, that, of course, depends upon the girls.

I hated that girl, hated her as much as I hated the Circle. Distrusted her more than I distrusted Zach's mom. Enemies are nothing compared to traitors, after all. It's the people you hold closest who have the most power to make you bleed. And that girl...she was as close as anyone could possibly be.

"Maybe they never had her at all. Maybe they sent her back for some reason," the trustee said, running through the options.
"Cammie is no double agent. She wasn't turned," Abby snapped, but the trustee talked on.
"The truth is, we don't know anything. Your daughter ran away, Rachel," the younger trustee said. "I think I speak for everyone when I say we're very interested to know exactly who came back."

"Cammie," Zach said, "are you sure it's your handwriting?"
For a second, the question seemed strange. Zach had been my sorta-boyfriend for a long time, and yet he didn't know what my handwriting looked like. I guess we weren't exactly love-notes-in-the-locker people. We were too busy being terrorists-want-to-kidnap-us people. It's easy to see how one would get in the way of the other.

"I killed a man," I said.
"Yes, you did."
"He was going to stab Bex, so...I killed him."
"And how does that make you feel?"
It was an excellent question-one the Gallagher Academy had never really taught me how to answer. I was tired and confused, guilty and relieved. But most of all, I felt nothing. And nothing, as it turns out, is one of the scariest feelings of all.

I'd been sleeping. I realised that I'd been sleeping and I hadn't dreamed.
"Zach," I said as I lay there. "Where did you go? When you were looking for me?"
I shifted in his arms, looked into his eyes.
"Crazy." His voice was a whisper against my skin. "I went crazy."

Neither of us spoke again for a long time. It was a sound I was used to. When you grow up in a house full of spies, you grow accustomed to silence. Life is classified. There is always so much that goes unsaid.

"You know," I whispered, "some girls might think it's creepy having a boy watch them sleep."
He smirked and pointed to himself. "Spy."
"Oh." I nodded. "Right. So you're a trained Peeping Tom."
"Product of the best peeping academies in the country"
"Well, now I feel much better."
Posted by Zed at Thursday, September 19, 2013