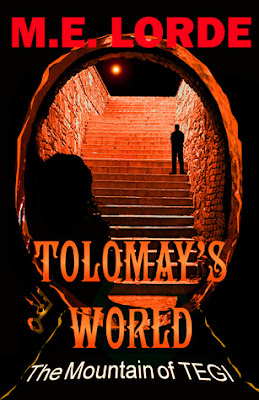 In this second book of a set of seven, Tolomay Ramey has travelled the world to get where she is… or more precisely, she travelled through time to get to the renewed Earth, fifteen hundred years in the future of our world. Her goal? To lead and keep safe all candidates coming to the replenished Earth.

A brilliant, giving soul ‘as stubborn as gravity’, Tolomay was the first to survive passage into the clean world, where humanity begins anew.

After three years alone, more have arrived. Now that she has fallen in love with Kenter, the arrogant first male to come, how will Tolomay react to Sandra, the female from the pods who lives and breathes for Kenter’s affections?

What happens when others show up with destructive intentions? Will she have the strength to deal with the more than uncomfortable so-called family situation she’s presented with? Can she adapt to a way of thinking she thought died over a thousand years ago? More importantly, does she want to?

None of those concerns or the ones of her own blond hair and blue eyes will compare to the great horror she uncovers at the Mountain of TEGI.

What will she do when her peace of life and those around her are suddenly threatened? Will the war Tarron spoke of come to pass?

The story continues from when two females and a male successfully make it through the swim and reach the 'clean world.' Upon seeing Kenter the girl, Sandra, unexpectedly kisses him in her delight. Tolomay watches and feels hurt and betrayed by the open show of affection since she had given her heart to Kenter, and runs away from the house as soon as she can.

Kenter hurries after her but by this time Tolomay has been kidnapped by people who have the same blond hair and blue eyes that she has. Even stranger is that one keeps calling himself Tolomay's brother. She is taken by her kidnappers through an elevator deep into a mountain, home to hundreds of people who have all been told that the 'clean world' is in fact toxic. This underground realm is led by a cruel, heartless King, who happens to be Tolomay's father and he intends his daughter to lead his people in the upcoming war.

I absolutely loved this book and finished reading in just over a day. This book was so different from the first, because here we see that Tolomay has an actual family, and they plan to keep her with them. We get to read about all their bizarre customs and Tolomay's difficulty in trying to win their trust so she can escape. We also discover that Tarron is not her real father, not that this changes how Tolomay feels about him as he did bring her up. I liked how Tolomay's kind and bright nature changed her brother's views about their life, and brought light to them too. The characters all felt so real especially the evil Father (King) because although it is hard to imagine how someone could treat their people with such cruelty, Lorde made it very believable.

The ending was fantastic; I can't wait to read the next book and find out if they manage to find Tarron, and who manages to escape! I do hope David doesn't get left behind, and I want to see how Kenter reacts to Eric..... :S

I could not see him, not now. My back settled against a surviving piece of wall near the logs he had stacked just this morn. Not a tear escaped. I refused them their glory. The only thing present of me in this place was the breathing of the air in my lungs and the death of my heart.

"Do you think it I brought her here for the pleasure of your tortures? No brains live in your rotting skull..." (Tolomay's Father to David)

"We have spoken of this before. You are my son, yes, but you know this in that you are not nearly the favourite of my children and are in fact the least, now including, and most especially, your sister."

Throughout the rest of dinner, eyes fell upon Eric and me. I was glad to share the burden and he knew my need to. I found the heart of a friend in this place without a soul.
Posted by Zed at Sunday, September 15, 2013