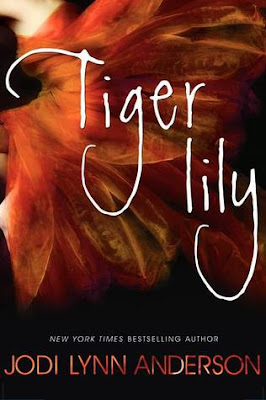 Before Peter Pan belonged to Wendy, he belonged to the girl with the crow feather in her hair. . . .

Fifteen-year-old Tiger Lily doesn't believe in love stories or happy endings. Then she meets the alluring teenage Peter Pan in the forbidden woods of Neverland and immediately falls under his spell.

Peter is unlike anyone she's ever known. Impetuous and brave, he both scares and enthralls her. As the leader of the Lost Boys, the most fearsome of Neverland's inhabitants, Peter is an unthinkable match for Tiger Lily. Soon, she is risking everything—her family, her future—to be with him. When she is faced with marriage to a terrible man in her own tribe, she must choose between the life she's always known and running away to an uncertain future with Peter.

With enemies threatening to tear them apart, the lovers seem doomed. But it's the arrival of Wendy Darling, an English girl who's everything Tiger Lily is not, that leads Tiger Lily to discover that the most dangerous enemies can live inside even the most loyal and loving heart.

From the New York Times bestselling author of Peaches comes a magical and bewitching story of the romance between a fearless heroine and the boy who wouldn't grow up.


Tiger Lily played havoc with my emotions. It is very difficult for a book to bring me to tears but this afternoon I felt like I was going to burst into tears on the train from work! The story is told from Tinkerbell's perspective, which is interesting to see because from the animated Peter Pan movie all I ever understood was that Peter and Wendy fall in love, Hook tries to kill them and Tink gets jealous. To be fair, Tink is a jealous fairy but there is a whole other story there... and it's not all about Wendy!
Tiger Lily's character was truly heartbreaking, how she's an outcast for her village, mocked because of her independence and 'boyish' behaviour, betrothed to a cruel villager and how she tries not to fall in love but can't seem to pull herself away from Peter even though she has accepted her fate. Tik Tok is Tiger Lily's adopted father/mother and his Jodi Anderson!
Zed (:
Favourite Quotes:
Let me tell you something straight off. This is a love story, but not like any you've heard of. The boy and the girl are far from innocent. Dear lives are lost. And good doesn't win. In some places, there is something ultimately good about endings. In Neverland, that is not the case.
"I'm not a stranger to your love of lost causes, dear one. But you have to be careful who you meet," he said, stoking a pipe thoughtfully. "You can't unmeet them."
"I'm not myself," she offered, guilty. She softened around Tik Tok, and when she did she was, for those rare moments, girlish.
He smiled. "You can never say that. You're just a piece of yourself right now that you don't like."
From above, the world looks orderly. That is one of the primary benefits of having wings. Being high shapes everything below into peaceful patterns. And even though you know there is chaos below, messiness everywhere, it is reassuring to sometimes think that it all eventually sorts itself out into something that looks elegant.
"Peter I shouldn't keep coming to see you. I'm supposed to..."
Peter shook his head hard, annoyed. "If you have reasons for not coming back, I don't want to know them. I just want you to come back anyway. Ignorance, see?"
"I miss you already," he said.
Tiger Lily wanted to say it back. But she held on to the words greedily, too caught in the habit of keeping herself a secret. And Peter-half sadly, half expectantly-let her go.
"I could never leave," Pine Sap said.
"Why?" she asked.
Pine Sap shrugged, and gestured in the direction of the village. "Because I think people must be the same everywhere. Only these people are my bones."
If there was a true moment that Tiger Lily fell so in love with Peter she could never turn back, it was that night, when he shivered and walked and told her he was warm, and told her he loved her so much. She was fierce, to be sure, but she had a girl's heart, after all. As she walked home that night, she was shaking from the largeness of it. I didn't know why she seemed so sad and happy at the same time. It was like falling from somewhere high up and breaking in half, and only one person having the secret to the puzzle of putting her back together.
Tiger Lily would go to hover at his door, planning to tell him, and then hesitate, unsure how to do so without telling him too many other things. So she waited, and tried to think of what to say. And she wondered when she had become the kind of person who wasn't brave enough to say the truth to him.
I tried to get in their way, but of course they dismissed me. Slightly said I was having "lady's hysterics." One of the twins mentioned something he'd heard about women going crazy twelve times a year.
He turned and met her eyes. "Yes, I'm going."
"But you loved me?" she said simply.
He stared at her for a long time. He looked much older, more serious. "I'm sorry about Tik Tok." There was no twinkle in his eyes. "Maybe I just love some of you. Maybe not enough." Tiger Lily blinked at him, and she didn't understand how anyone could only love a part. Her greedy heart didn't work that way. She turned to go.
Posted by Zed at Tuesday, September 17, 2013