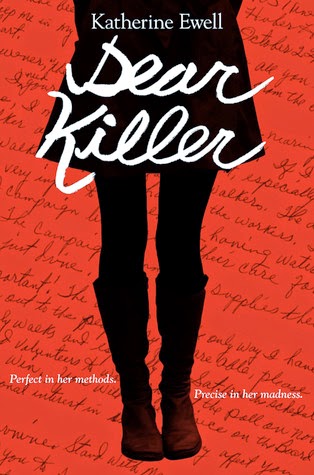 About:
Rule One—Nothing is right, nothing is wrong.
Rule Two—Be careful.
Rule Three—Fight using your legs whenever possible, because they’re the strongest part of your body. Your arms are the weakest.
Rule Four—Hit to kill. The first blow should be the last, if at all possible.
Rule Five—The letters are the law.

Kit takes her role as London’s notorious “Perfect Killer” seriously. The letters and cash that come to her via a secret mailbox are not a game; choosing who to kill is not an impulse decision. Every letter she receives begins with “Dear Killer,” and every time Kit murders, she leaves a letter with the dead body. Her moral nihilism and thus her murders are a way of life—the only way of life she has ever known.

But when a letter appears in the mailbox that will have the power to topple Kit’s convictions as perfectly as she commits her murders, she must make a decision: follow the only rules she has ever known, or challenge Rule One, and go from there.

Katherine Ewell’s Dear Killer is a sinister psychological thriller that explores the thin line between good and evil, and the messiness of that inevitable moment when life contradicts everything you believe.
Source: Goodreads
My rating: 4.75/5
My rating:
The ‘Perfect Killer’ is the most famous serial killer in London since Jack the Ripper. The murders are perfect, without a trace of evidence of who it is, just leaving a letter behind from the person who asked for the kill.


Kit looks like a regular teenage girl, living with her rich mum and her sometimes-around father. She is pretty, but not beautiful, friendly but has no friends, a smart student but not an academic genius; altogether seemingly normal, which is just how she likes it. The last thing she wants is to be noticed, considering she is the ‘Perfect Killer.’


This book is so cleverly written, with murders in creepy detail. Kit’s story is unusual, her upbringing consisted of her mum training her to be an assassin, and her first kills were before she hit her teenage years. Kit begins to get too comfortable, almost cocky in her murders. Her belief is that there is no right or wrong, but she gets to a point when she can’t remember why she kills, only that she’s enjoying it too much. Kit befriends the policeman who is in charge of finding the ‘Perfect Killer’ but doesn’t expect to start having feelings for him. Will he catch her, or will her murderous streak take over her sanity?
Zed (:


Nothing is right and nothing is wrong. For some people a thing may be right, and for others it may be wrong. There is no greater truth to morality – it is merely an opinion.


I forced myself to smile pleasantly, trying to make myself look a little dull around the edges. No one suspected stupid people.