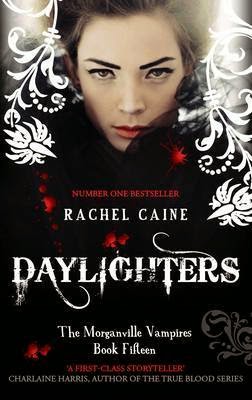 
While Morganville, Texas, is often a troubled town, Claire Danvers and her friends are looking forward to coming home. But the Morganville they return to isn’t the one they know; it’s become a different place—a deadly one…

Something drastic has happened in Morganville while Claire and her friends were away. The town looks cleaner and happier than they’ve ever seen it before, but when their incoming group is arrested and separated—vampires from humans—they realize that the changes definitely aren’t for the better.

It seems that an organization called the Daylight Foundation has offered the population of Morganville something they’ve never had: hope of a vampire-free future. And while it sounds like salvation—even for the vampires themselves—the truth is far more sinister and deadly.

Now, Claire, Shane and Eve need to find a way to break their friends out of Daylighter custody, before the vampires of Morganville meet their untimely end…

The last in the Morganville Series, in this book we see how much Morganville has changed now that the town has been taken over by humans rather than vampires. Some would think this was a good think, seeing as the vampires were the sole reason why everyone who enters Morganville is stuck there and always on edge, trying not to be the next snack on a hungry vampire’s list. The town is being run by Daylighters, and they are pledging that the humans can now live peaceful lives. However, it’s not really peace if there are people (albeit non-breathing people) suffering.

All the vampires are being imprisoned at the mall, for everyone’s ‘safety.’ This includes the ex-founder Amelie, her arch-nemesis/companion Oliver, Michael and Myrnin, all of which are very important to Claire and her friends. What makes it worse is that the vampires are forced to wear shock collars to keep them under control, and are being fed modified blood that isn’t quite satisfying their hunger.

Claire is out to fight for vampire rights, but this is being made more difficult when she sees the human residents so happy and carefree with their new lives. Claire doesn’t want ot take that away from them, but at the same time she has to protect her friends and what is right, because something is definitely not right. The new leader, Fallon, appears caring from afar but to what ends will he go to ‘cure’ the vampires?

It’s been a while since I’ve read a Morganville book, and I have really missed Myrnin and his crazy personality. I’m sad to see the series ending but its been a great one. Plus, I hear there is a tv series based on Morganville, due to release this Summer – Yay me!

The deputy turned around and gave her a cold, hard stare. ‘Sit quietly,’ he said. ‘if you don’t, I’ll shock you until you do.’
‘With what, your breath? Ever heard of flossing, Deputy Dimwit?’

‘Or?’ Fallon asked. It wasn’t confrontational, really, just an interested question.
‘Look, you clearly do not know who you’re screwing with,’ Eve said, and she was definitely confrontational, a whole lot. ‘I want my husband back, Osama bin Crazy, right the hell now!’

‘Why is it you can only wreak havoc, anyway?- Why not, I don’t know, world peace?’

‘We need to know what exactly they’re planning to do,’ Eve said and took in a deep breath. ‘I’ll go.’
‘How do you plan on finding anything out there? With the power of your awesomeness?’

He grabbed her and kissed her. ‘You brought me grenades. You are officially the best girlfriend ever.’

He’d moved so fast and decisively, and the woman wasn’t moving. ‘Did you-is she-?’
‘Oh, bother, don’t make that face, Claire. No, I didn’t kill the wretched woman, I only knocked her out. I know how you feel about such things. Though she does smell delicious.’

Besides, I must go back tonight before they miss me, which means the collar must be intact. Oh, and my head. They’d notice.’
‘But-‘
‘We are in the middle of a prison break! Come on, now, don’t dally. Do you have any baggage?’
‘It’s a prison, Myrnin, not a hotel.’
‘Well, modern prisons are so much nicer these days, one never knows.’

‘…I mistrust her, but both Steve and Shane-‘
‘Eve! Honestly, Myrnin how long have you known her?’
‘It’s a very odd name, you know. Efa, now, that’s a proper sort of name. Or even Aoife,’ he said.

‘Would that be the dead guard in our damn basement?’
‘Well, of course, how many dead guards could there be? Why, did you kill one, too? Wasteful.’

‘What is he dependent on, then?’
‘What are any of you? Air, water, food, the kindness of random strangers.’ Myrnin shuddered, and it looked genuine. ‘I’d much rather be dependent on blood. Much simpler and easier to obtain in times of chaos. Never rationed, blood. And very often freely donated.’

‘…If anyone comes to bit you while I’m gone-well, try not to attract attention. Die quietly.’