Review of The Race for Polldovia

The Race for Polldovia
By James Rochfort 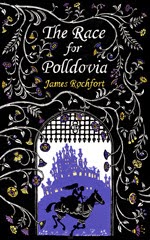 Nine-year-old Sophia daydreams about the beautiful Princess Polly and the fairytale land of Polldovia. One day she finds herself inhabiting this fantasy world but a very different one to that she has so far imagined.
She and Polly are in Suspyria, Polldovia’s war-ravaged neighbour, ruled by the warlord Naberius and his monstrous Dark Army. Imprisoned in Naberius’ fearful dungeon, escape is their only means of survival and a hair-raising chase ensues. Their quest is to find a magical flower, the only thing that can defeat Naberius and save Polldovia from being destroyed at the hands of his soldiers. With the help of Acanthus, their magical and faithful steed, Polly and Sophia are caught up in a race against time and must use all their strength and bravery to outrun their pursuers…

**I received a free copy of this book from Book Guild Publishing in exchange for an honest review.**
Sophia loves to daydream, but her daydreams are different to most. She dreams mostly about a young Princess called Polly, who lives in the country of Polldovia. Sophia has no control over these daydreams in terms of how they play out, but mostly Polly is having a lovely time in her world, saving animals in need and helping wherever possible.
That is until one day, Sophia has a horrible daydream about Princess Polly being trapped in a dungeon by some hideous monsters, and the strangest thing is that Polly is crying out to Sophia for help. At first Sophia can hardly believe it but when she keeps getting a similar daydream, or rather a day-nightmare, she realises that there is definitely something wrong and she must do something to save the Princess.
By some unknown power, Sophia manages to daydream her way into physically being in Polly’s world. The two girls manage to escape together from the monster Nebarius’ castle, and Polly explains how she is searching for a special flower that will save her kingdom from these evil creatures, and their journey begins.
At first, I thought this was more Children’s fiction than Young Adult, but although the story is about a little girl helping a princess, it is written to appeal to slightly older children than I first expected. Sophia and Polly have a unique bond, and I felt that there was something magical about it.
The length of the book was perfect, and although the story ended on a happy note (no spoilers), I imagine that there is a possibility of this being a series.
Overall, a light, fun read by a new author.
Zed (:
Favourite Quotes:
Indeed, when she asked her dad if daydreaming was a good thing, they had agreed that it wasn't a bad thing. Good daydreaming always involved a large dose of imagination - and using your imagination, they had agreed, was healthy for the brain.
If the people of Polldovia had laid all their hopes with their Princess, then she had laid all her hopes with Sophia. The fate of a nation was in the hands of a nine-year old. It seemed ridiculous.
'Destiny and fate. If you are meant to see each other again, then you will.'
Posted by Zed at Wednesday, June 18, 2014