Review of the Awakening 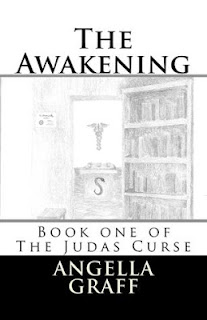 The Awakening
By Angella Graff


The Awakening is a tale of immortals, ancient gods, and a Detective who doesn’t believe in any of it. Detective Ben Stanford is forced to come face to face with theology, mythos and everything he refused to believe in as his world is turned upside down by Mark, the immortal Gospel writer, who requests the detective’s help in finding his missing companion, Judas Iscariot.

As Ben dives deeper into the world of broken Theology, ancient religions and terrifying Greek gods, he’s forced to come to terms with the world where vast forces struggle in their endless game of power. He must make his way, with the help of companions he doesn’t believe in or trust, to try and stop a potential global disaster.


My thoughts:
*I was given this book by the author in exchange for an honest review*


Slightly longer than the books I have been reading over the last few months, however not so long that I got bored. The further I got into the story, the more complex and interesting it got.


A light read is good when you are in the mood but the best books are the challenging ones, the ones that make your brain tick. The Awakening definitely falls into the latter. The book incorporates a mix of Christianity, Greek Gods, the idea of hosts and vessels and much ,much more.


I don’t want to say too much about the book but I enjoyed the mystery that surrounded it. There were a lot of characters to learn about and at times it could become confusing but each character’s personality was described in detail, so I felt I could differentiate their individual traits more easily.


My favourite characters were Ben and Mark. Ben was a sceptic and I liked that about him. Even when the proof was infront of him confirming that he had been healed of his brain tumour by Judas’ touch, he sought a rational scientific explanation. The Greek side of Greg made me laugh, he was so carefree and unlike the human doctor!


Mark on the other hand was a surprise, especially the whole blind act. I felt incredibly sad for him because his mysterious curse was always holding him back and because of his immortality he was all alone, aside from his missing companion.

There was a cliffhanger ending and it was beautifully written! Such an unexpected twist that I never could have imagined.
Overall, I really enjoyed the book and recommend it to anyone in need of a different type of paranormal type mystery.
Thank you Angella, and I look forward to the next read!