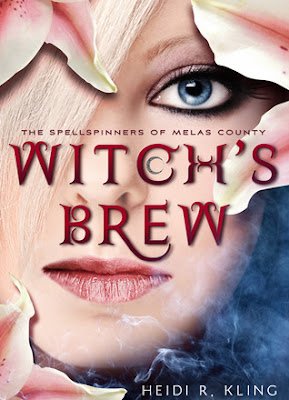 About:
The Spellspinners of Melas County is a fantasy YA romance series about a witch, a warlock, and their fight for their forbidden but prophesied love.

Once soulmates, the witch and warlock covens of the California coast have been estranged for a century. Raised to hate each other, their teenagers meet in the Solstice Stones, a magical battleground where they draw energy from each other to maintain their balance. 16 year olds Logan and Lily have spent years training for their first Stones…only to discover just days before that the enemy may not be what either of them had thought.

In Witch’s Brew, Lily is torn between her feelings for Logan and her coven’s need to know who—or what—he is. The young lovers race against time, their distrust for each other, and the powerful influence of their elders to unravel the mystery of their pasts before their future is destroyed.

‎From the first few chapters I was drawn into Witches brew. I've read many books about witches, about warlocks, about witches and warlocks, but never a story about witches versus warlocks.
Lily is the leader of her coven and is preparing for the upcoming battle; also known as gleaning, where she will have to fight a warlock and from my understanding, only one can survive. But how can she win this fight when even her most basic spells are failing her? And not just Lily, her bestfriend is also feeling a reduced magical vibe... but they must overcome it and practice harder, because there is no way the 'evil' warlocks can be allowed to win.
Unexpectedly lily comes across a warlock, and despite her attempts to stay cautious and alert just in case he attempts to trick her, she feels at ease with him, almost safe. In fact she feels more than that, their energies react and theirs a pull that neither Lily nor Logan can explain.
Soon after Lily discovers that theirs a curse that the elders have kept from the young witches, which is causing their powers to wane. And if the hundred year old curse isn't broken then the witches will lose their powers and become human again.

I really enjoyed this story, and the way the warlocks were described as evil and the witches good, but we could see both sides having traits of light and darkness. I'm a bit afraid of Logan's 'father' as he seems to be too power hungry, trying to take away Logan's power in an attempt to reverse his ageing process. I suspect he's responsible for the voodoo doll too!
I look forward to reading book 2 to find out more about this curse, and who Logan's real parents are and why is it that only Lily and Logan can breathe underwater; an uncanny ability that only they possess.

She'd said, "I don't want you to think about what happens after, only to concentrate on what you can do before, to train, so that you will come home safely. Focus on strength, courage, and the greater good, which will come from doing your personal best. The rest will follow."
"I don't want to die," I'd said, swallowing back tears.
"Then don't," was her reply.

"I suppose this is goodbye," Logan said.
"I guess so," I said. "Thanks for not trying to kill me."
"It was my pleasure," he said, "not to try and kill you."
I surprised myself by raising a palm to Logan, a gesture of peace.
He held his own palm up to mine, taking the gesture further. Friendship.

"I've worked hard to get where I am. Besides, magic is all I've ever known. I see how humans live. I was there during Katrina, remember? It was a tragic mess- the worst of the human condition. I can transcend al that now. The inevitable death and dying. The rot. The struggle to work, reproduce, just to start heading downhill toward death? No thanks."

Orchid shrugged. "Look, we've been living in Melas for generations and generations. Not all humans are stupid. Most, sure. But not all. If that cotton-candy-head barista knows something I mean, who would believe him if he told? And who would he tell? The key to survival, Lily, is making sure the people who cold take you down never find out your secrets."

I avoided her eyes. "I don't want to feel anything for him."
I felt the weight of her words in the air, strong as her perfume. "I know it's scary. Feelings aren't something you want or don't want- they are something you have or don't. Every feeling is a gift. It means you are real."

A guy that could sport pink hair AND drive a pink car around town must be hugely firm in his masculinity. I told him so.
"What is pink if not a softer shade of red, right?"

"Perhaps out amulets were switched at birth."
Logan half-grinned, but his brow was still furrowed in thought. "If we're related, I'm going to kill someone." He laughed then. An honest, real, laugh. Then felt his fingers on my cheek, tipping my face to look into his eyes.
"If we're related, the universe has a seriously twisted sense of humour."