1. Ok ordinarily I would leave the best until last but I believe Augustus Waters from The Fault in Our Stars deserves a special mention. Yes, Augustus in the book is a disabled guy who suffers from Cancer but he was also unbelievably adorable so I could not help being awestruck! On a different note, I cannot wait until John Green comes to London in February 2013, I already have my tickets (: Yay me.

2. Patch from Finale (Hush Hush #4) by Becca Fitzpatrick. Dark, mysterious and unpredictable, Patch was definitely one of my favourites.

3. Hmmm....who can be number 3... perhaps the lazy yet loyal Shane from Morganville Vampires?

4. Another best boyfriend of mine (now that definitely sounds dodgey) was Daniel from Rapture (fallen #4) by Lauren Kate. I liked his predicament of losing his Luce again and again, and still being unable to stop himself from falling in love with her.

5. Oh my, how have I forgotten to mention the warrior Akiva from Days of Blood & Starlight. His story is beautiful, falling in love with the enemy, watching the Chimaera slaughter his beloved and then having her resurrected as Karou.

6. There were many potential boyfriends in the The Raven Boys by Maggie Stiefvater, and although this was not a top read for 2012, I think one of the raven boys makes this list. The focussed Gansey in his search or perhaps poor Adam always trying to fit in? No, I preferred Ronan's fierceness to the others, partly because he seemed more of the tortured soul than the others, and partly because he made me laugh the most too, with his brash comments!

7. *sigh* and ofcourse the one and only Adrian from The Golden Lily by Richelle Mead. Adrian's charm and his attraction to alchemist Sydney, puts him in my top 10 for sure!

8. Now, I tend to prefer dark over light but in the case of Fated (Soul seekers #1) by Alyson Noel, I must say I quite liked Dace, although I try to omit his long hair when I picture what his character looks like!

9. Raffe! Awesome guy from Angelfall by Susan Ee, loved his slow growing with Penryn who is on a mission to try and get her sister back. 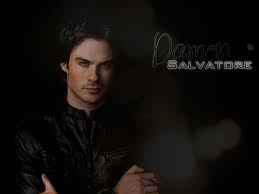 10. I am finding it rather difficult to think of a tenth best boyfriend because although I read plenty of books this year, a fair number of those books were releases prior to 2012, which I had not gotten around to reading. And so, I will end this post with the one and only Damon Salvatore from the Vampire Diaries. Yes I am cheating again because I have not actually read any of the new vampire diaries book releases by L.J.Smith, instead I watch the TVD series. Regardless, the bestest of best boyfriends for 2012 has to be Damon Salvatore!