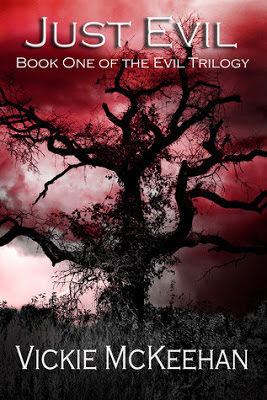 
The Evil Trilogy
Despite growing up together in their trendy Beverly Hills neighborhood, three best friends hide dark childhoods. The lives of Kit, Baylee and Quinn have been anything but perfect. Little do they know a stranger is about to unravel long, buried secrets, bringing the past back to life with a vengeance.

Just Evil
Kit Griffin has finally overcome a painful childhood at the hands of her mother, former actress Alana Stevens. No longer living in the grasp of the cold, tyrannical woman, Kit's life is finally on track. That is, until Alana is found brutally murdered on Mother's Day, pulling Kit back to the dark horrors of her past. To make matters worse, the police consider Kit the prime suspect.

Jake Boston is an old family friend and the man Kit has loved since she was a teen. He's fighting his own demons as a suspect in his wife's murder two years earlier. Despite his past, he's determined to win Kit over once and for all. But before that can happen they need to convince the police there's a killer working his way down a list with cold-hearted vengeance in mind.

Forced to delve into Alana's dark past, Jake and Kit uncover a forty-year-old double murder leading them straight to the door of a legal dynasty. Soon they find out just how far the heirs will go to keep the past buried.
Source Amazon

Wow. I'm not much of a mystery/thriller reader but this was one exception I am glad I stumbled across. There was so much going on in this story, taking me from surprise again and again and again. I can't reveal too much except that I am so glad this is a series because I cannot wait to read the next story.

Each time I heard what Alana did to her daughter Kit, I felt a pang of sadness, anger and fear because Vickie got this right, Alana was pure evil. It was heart-wrenching how it was possible for someone to be that cruel to their child. It scares me to think that there might actually be parents out there like that. I can understand the concept of abusive parents to some extent but some of the things Alana did were really, I don't know of a better word, spiteful. It's like she was taking her anger out on the child and I still cannot understand her motive or reasoning.

Kit's and Jake's friends were brilliant. I liked each one of them and found all of their loyalties, and sudden defensiveness on behalf of their friends entertaining. Especially how everytime someone upset Kit, Baylee and Quinn would immediately attack!

Although I have read some great reads in the past few months, Just Evil will be one of my favourites from 2013.