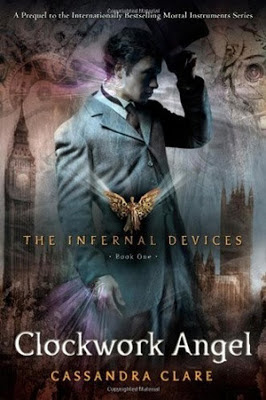 About
Magic is dangerous—but love is more dangerous still.

When sixteen-year-old Tessa Gray crosses the ocean to find her brother, her destination is England, the time is the reign of Queen Victoria, and something terrifying is waiting for her in London's Downworld, where vampires, warlocks and other supernatural folk stalk the gaslit streets. Only the Shadowhunters, warriors dedicated to ridding the world of demons, keep order amidst the chaos.

Kidnapped by the mysterious Dark Sisters, members of a secret organization called The Pandemonium Club, Tessa soon learns that she herself is a Downworlder with a rare ability: the power to transform, at will, into another person. What’s more, the Magister, the shadowy figure who runs the Club, will stop at nothing to claim Tessa's power for his own.

Friendless and hunted, Tessa takes refuge with the Shadowhunters of the London Institute, who swear to find her brother if she will use her power to help them. She soon finds herself fascinated by—and torn between—two best friends: James, whose fragile beauty hides a deadly secret, and blue-eyed Will, whose caustic wit and volatile moods keep everyone in his life at arm's length . . . everyone, that is, but Tessa. As their search draws them deep into the heart of an arcane plot that threatens to destroy the Shadowhunters, Tessa realizes that she may need to choose between saving her brother and helping her new friends save the world. . . . and that love may be the most dangerous magic of all.

Clockwork Angel is a wonderful read, and more so because it is set in England as it used to be. And so, the language is the lovely, prim and proper English that I adore, although I may be biased considering I live in England! The regular references to classic literature, and poems adds to the books' appeal.

This book was more of a mystery/detective story than mortal instruments and although I should not really compare the two I cannot help myself. Again, there is a very handsome, vain and witty boy called William, who has similarities with Jace from TMI. Then there is Tessa, who has some likeness to Clary, in that she was unaware of the Shadowhunter, is brave and can speak back to Will. Jessamine is quite the drama queen, who grew up with the boys and so she has some similarities to Isabelle from TMI. But unlike Isabelle, Jessamine hates being a Shadowhunter and does not like to fight. Her greatest ambition is to lead a normal life as a lady, marry and have babies, all without the drama and violence that the Shadow World involves.

Jem, on the other hand, is unlike characters from TMI. He has a sweet, kind nature and is suffering from a mysterious illness, which is why he cannot fight as much as he would like. Jem and Will both live in the Institute and are fighting partners; parabatai. I can sense that there will be problems in their friendship since both seem to take an interest in Tessa, which will be a considerable shame. I hate it when good friendships crumble because of a girl/boy.

I felt so sorry for Tessa, orphaned and then her aunt dies. The only family member that is living is her brother Nathaniel but she cannot find him and fears his safety. In addition, after being tortured by the Dark Sisters, her dormant ability comes to light. Tessa is a shapeshifter in that she can will herself to 'change' into any other person providing she has some object of that person's. This ability makes Tessa feel even more alone than before because she not a shadowhunter, but is not human either. No one is sure what she is :S

It is unfair of me to compare the two series but the main similarity between the two are that they are both fascinating reads. There is much humour in Clockwork Angel, and you can see snippets of that in my favourite quotes below.

I was afraid to read a book by Cassandra Clare other than TMI but I am glad I have begun reading the Infernal Devices series. The only problem is that I believe there are only 3 books in this series, yet!

Without him, she was completely alone in the world. There was no one at all for her. No one in the world who cared whether she lived or died. Sometimes the horror of that thought threatened to overwhelm her and plunge her down into a bottomless darkness from which there would be no return. If no one in the entire world cared about you, did you really exist at all?

"How can you not understand?" He pointed at her books. "You read novels. Obviously, I'm here to rescue you. Don't I look like Sir Galahad?" He raised his arms dramatically. "'My strength is as the strength of tem, Because my heart is pure--'"
Something echoed, far away inside the house- the sound of a door slamming.
Will said a word Sir Galahad would never have said, and sprang away from the window.

"As for the temperature of Hell, Miss Gray," he said, "let me give you a piece of advice. The handsome fellow who's trying to rescue you from a hideous fate is never wrong. Not even if he says the sky is purple and made of hedgehogs."

"You know what this means?"
Will set the vase down. "That you set yourself on fire and didn't even notice?"
"That the flame-retardant mixture I developed last week works!" Henry said proudly. "This material must have been burning for a good ten minutes, and it isn't even half burned through!" He squinted down at his arm. "Perhaps I ought to set the other sleeve on fire and see how long-"
"Henry," said Charlotte, who appeared to have recovered from her shock. "If you set yourself on fire deliberately, I will institute divorce proceedings. Now sit down and eat your supper."

Will took several chocolate tarts from the plate where they had been left to cool on the table. Will offered one to Tessa.
She shuddered. "Oh, no. I hate chocolate."
Will looked horrified. "What kind of monster could possible hate chocolate?"

"I never liked it much- seemed like so much nonsense."
Will's eyes were very blue. "There's plenty of sense in nonsense sometimes, if you wish to look for it."

"Be careful with it, though. It's six hundred years old and the only copy of its kind. Losing or damaging it is punishable by death under the Law."
Tessa thrust the book away from her as if it were on fire. "You can't be serious."
"You're right. I'm not." Will leaped down from the ladder and landed lightly in front of her. "You do believe everything I say, though don't you? Do I seem unusually trustworthy to you, or are you just the naïve sort?"

"Oh-Armadale! And The Woman in White...Are you laughing at me?"
"Not at you," said Will, grinning, "more because of you. I've never seen anyone get so excited over books before. You'd think they were diamonds."
"Well, they are, aren't they? Isn't there anything you love like that? And don't say 'spats' or 'lawn tennis' or something silly."
"Good Lord," he said with mock horror, "it's like she knows me already."

"What to do with you, of course. Downworlders can't live in the Institute forever," said Will. "I say we sell her to the Gypsies on Hampstead Heath," he added, turning to Charlotte. "I hear they purchase spare women as well as horses."
"Will, stop it." Charlotte glanced up from her breakfast. "That's ridiculous."
Will leaned back in his chair. "You're right. They'd never buy her. Too scrawny."

"A lady does not read the newspaper. The society pages, perhaps, or the theatre news. Not this filth."
"But you are not a lady, Jessamine-," Charlotte began.
"Dear me," said Will. "Such harsh truths so early in the morning cannot be good for the digestion."

Jessamine blew out her cheeks in exasperation "I think you ought to let me take poor Tessa into town to get some new clothes. Otherwise, the first time she takes a deep breath, that dress will fall right off her."
Will looked interested. "I think she should try that out now and see what happens."

Tessa, whose head had begun to ache, wished Jessamine would cease to speak of "catching" husbands the way one might catch a cold, or a runaway cat.

"I like ducks," Jem observed diplomatically. "Especially the ones in Hyde Park." He glanced sideways at Will; both boys were sitting on the edge of the high table, their legs dangling over the side. "Remember when you tried to convince me to feed a poultry pie to the mallards in the park to see if you could breed a race of cannibal ducks?"
"They ate it too," Will reminisced. "Bloodthirsty little beasts. Never trust a duck."

"What happened in there? We were waiting for the signal-"
"Henry's bloody Phosphor didn't work. Instead of sending up a flare of light, it set the curtains on fire."

"And Tessa, the silly creature, was supposed to be out the door with Magnus, but she wouldn't leave-"
"Her brother was manacled to a chair in the room," Jem pointed out. "I'm not sure I would have left either."
"I see you're determined to miss my point."

"Do reasons matter when there's nothing that can be done to change things?"

"You mean that I shouldn't wring my heart out over some boy who will never care for me-"
"No!" Sophie said. "There are worse things than that. It's all right to love someone who doesn't love you back, as long as they're worth you loving them. As long as they deserve it."

"He's known you since you were a boy. He cares for you like you were his own younger brother. As do I. All I've ever done is love you, Will-"
"Yes," said Will, "and I wish you wouldn't."
Charlotte made a pained noise, like a kicked puppy. "I know you don't mean that."
"I mean everything I say," said Will.

"How rude. Many who have gazed upon me have compared the experience to gazing at the radiance of the sun."
Jem still had his eyes closed. "If they mean it gives you a headache, they aren't wrong."

"No," he said. "You are not a fool like your brother. He is a fool and a coward. You are a fool who has some courage."