Review of City of Fallen Ashes 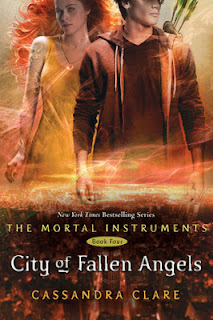 About
The Mortal War is over, and sixteen-year-old Clary Fray is back home in New York, excited about all the possibilities before her. She's training to become a Shadowhunter and to use her unique power. Her mother is getting married to the love of her life. Downworlders and Shadowhunters are at peace at last. And - most importantly of all - she can finally call Jace her boyfriend.

But nothing comes without a price.

Someone is murdering Shadowhunters who used to be in Valentine's Circle, provoking tensions between Downworlders and Shadowhunters that could lead to a second bloody war. Clary's best friend, Simon, can't help her. His mother just found out that he's a vampire and now he's homeless. Everywhere he turns, someone wants him on their side - along with the power of the curse that's wrecking his life. And they're willing to do anything to get what they want. At the same time he's dating two beautiful, dangerous girls - neither of whom knows about the other one.

When Jace begins to pull away from Clary without explaining why, she is forced to delve into the heart of a mystery whose solution reveals her worst nightmare: She herself has set in motion a terrible chain of events that could lead to her losing everything she loves. Even Jace.

Love. Blood. Betrayal. Revenge. The stakes are higher than ever in City of Fallen Angels.

Book 4 had a different direction than the others. Whilst the previous books focussed on fighting demons, here we saw more of the character's fights with themselves. Simon fighting the reality that he is a vampire, Alec wondering about his future with the immortal Magnus and Jace fighting for control over himself. We also see the semi-return of Sebastian; we all knew he wasn't completely dead.

Poor Jace and Clary. Just as things seem like they are getting better, it takes a turn for the worst. And took four ended, it does not look like their troubles are over any time soon.

Simon, as always, is the sweetest vampire there is. Well, as sweet as a bloodsucker can be! The story shows how we cannot escape reality. Simon can carry on playing in his band and going to school but no matter how hard he pretends to be normal, the fact is that he is not. He cannot stop his cravings for blood...and eventually he has to give in. To make matters worse, he has the mark of Cain upon him, so if anyone is truly cursed it is dear old Simon. He does seem to get the bad end of the deal doesn't he? At least he has Isabelle to make him feel better :P

Overall, a thrilling read, but I do hope Jace is cured soon. I don't think I can take any more of his moping around...

By the time she came back to the training room, Isabelle and Jace had left the topic of dead Shadowhunters behind and had moved on to something Jace apparently found even more horrifying - Isabelle's date with Simon. "I can't believe he took you to an actual restaurant." Jace was on his feet now, putting away the floor mats and training gear while Isabelle leaned against the wall and played with her new gloves. "I assumed his idea of a date would be making you watch him play World of Warcraft with his nerd friends."
"I," Clary pointed out, "am one of his nerd friends, thank you."

Maybe that was the secret, he thought. Keep moving. Like a shark. Go to where no one can find you. A fugitive and a wanderer shalt thou be in the earth.
But that only worked if there was no one you cared about leaving behind.

Though Simon imagined Jace ran the gamut of facial expressions when he was alone with Clary, his default one around other people was a fierce sort of blankness. "He looks," Simon had once said to Isabelle, "like he's thinking about something deep and meaningful, but if you ask him what it is, he'll punch you in the face."
"So don't ask him," Isabelle had said, as if she thought Simon was being ridiculous. "No one says you two need to be friends."

"You look lousy," he said.
Jace blinked. "Seems an odd time to start an insult contest, but if you insist, I could probably think up something good."
"No, I mean it. You don't look good."
"This from a guy who has all the sex appeal of a penguin. Look I realise you may be jealous that the good Lord didn't deal you the same chiselled hand he dealt me, but that's no reason to-"
"I am not trying to insult you," Simon snapped. "I mean you look sick. When was the last time you ate anything?"

"Just think of yourself as someone who has two fathers for a while."
"You can't have two fathers."
"Sure you can," Simon said. "Who says you can't? We can buy you one of those books they have for little kids. Timmy has Two Dads. Except I don't think they have one called Timmy has Two Dads and One of Them Was Evil. That part you're going to have to work through on your own."

"Yeah," Jace said, "but youre a vampire. Blood isn't like food for you. Blood is...blood."
"That's very illuminating." Simon flung himself into the armchair across from the TV; it had probably once been a pale gold velvet but was now worn to the grayish pile. "Do you have a lot of other profound thoughts like that? Blood is blood? A toaster is a toaster? A Gelatinous Cube is a Gelatinous Cube?"

"Take it," Clary said, looking at Jace. "Take it and kill either her or me. It's your choice."
Slowly Jace bent down and picked up the knife.

But Magnus, he thought. You never told me. Never warned me it would be like this, that I would wake up one day and realise that I was going somewhere you couldn't follow. That we are essentially not the same. There's no "till death do us part" for those who never die.

Lilith spat. "You love each other- anyone can see that, looking at you- that kind of love that can burn down the world or raise it up in glory.

"Not really alive isn't dead enough for me," she said. "I'm going out there and I'm going to cut him into a thousand pieces."