Review of City of Ashes 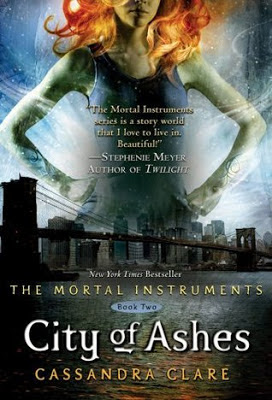 About
Clary Fray just wishes that her life would go back to normal. But what's normal when you're a demon-slaying Shadowhunter, your mother is in a magically induced coma, and you can suddenly see Downworlders like werewolves, vampires, and faeries? If Clary left the world of the Shadowhunters behind, it would mean more time with her best friend, Simon, who's becoming more than a friend. But the Shadowhunting world isn't ready to let her go — especially her handsome, infuriating, newfound brother, Jace. And Clary's only chance to help her mother is to track down rogue Shadowhunter Valentine, who is probably insane, certainly evil — and also her father.

To complicate matters, someone in New York City is murdering Downworlder children. Is Valentine behind the killings — and if he is, what is he trying to do? When the second of the Mortal Instruments, the Soul-Sword, is stolen, the terrifying Inquisitor arrives to investigate and zooms right in on Jace. How can Clary stop Valentine if Jace is willing to betray everything he believes in to help their father?

In this breathtaking sequel to City of Bones, Cassandra Clare lures her readers back into the dark grip of New York City's Downworld, where love is never safe and power becomes the deadliest temptation.

My Thoughts
Again, a fantastic read by Cassandra Clare. In book #2 there are more uncovered secrets, more adventure and of course more confused feelings. Most surprisingly, Simon steps up and becomes more confident, self assured and well, a bit of a badass considering he won't die!

I loved the scene with the faerie queen, although I sympathise with Simon. He finally thinks there is a chance with Clary considering Jace is her brother, but his hope is short-lived. Although I must say, I am glad Clary gave Simon a chance...We get to see more of Magnus, who is frankly hilarious.

The Mortal Instruments series is highly addictive and I look forward to reading more of Cassandra Clare's other books (:

"I didn't know you were bringing the mundane."
His blue eyes flickered uneasily over Simon.
"That's what I like about you people," said Simon. "You always make me feel so welcome."

Jace put his head in his hands. "Tell Isabelle no."
"But she thinks it's a good idea," Alec protested.
"Then tell her no twice."

Something inside Clary cracked and broke, and words came pouring out.
"What do you want me to tell you? The truth? The truth is that I love Simon like I should love you, and I wish he was my brother and you weren't, but I can't do anything about that and neither can you! Or do you have some ideas, since you're so goddamned smart?"

He smiled at her. It was a sad smile with something else underneath. "Ypu know what the worst thing I can imagines is?"
She blinked at him. "No."
"Not trusting someone I love."
She put her hand on his sleeve. He didn't move away, but he didn't respond to her touch either. "Do you mean-"
"Yes," he said., knowing what she was about to ask. "I mean you."
"But you can trust me."
"I used to think I could," he said. "But I get the feeling you would rather pine over someone you can never possibly be with than try being with someone you can."