Fall of Night
(The Morganville Vampires #14) 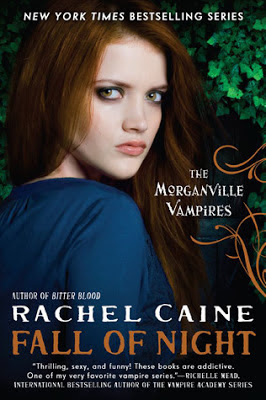 Thanks to its unique combination of human and vampire residents, Morganville, Texas, is a small college town with big-time problems. When student Claire Danvers gets the chance to experience life on the outside, she takes it. But Morganville isn’t the only town with vampire trouble...

Claire never thought she’d leave Morganville, but when she gets accepted into the graduate program at MIT, she can’t pass up the opportunity. Saying good-bye to her friends is bittersweet, especially since things are still raw and unsettled between Claire and her boyfriend, Shane.

Her new life at MIT is scary and exciting, but Morganville is never really far from Claire’s mind. Enrolled in a special advanced study program with Professor Irene Anderson, a former Morganville native, Claire is able to work on her machine, which is designed to cancel the mental abilities of vampires.

But when she begins testing her machine on live subjects, things quickly spiral out of control, and Claire starts to wonder whether leaving Morganville was the last mistake she’ll ever make...

My Thoughts:
I was beginning to tire of the dramas within Morganville and so this book was a refreshing change. Claire's dream of going to MIT becomes a reality as she sets off, leaving behind her friends, mourning, the vamps and drama. Or so she thinks. Little does Clare know that her own invention becomes a sought after weapon, which will change everything.

Clare may have escaped Morganville but Morganville will not let her go that easily! This 14th book in the series is packed with adventure, tension and weirdness!

I don't want to spoil the ending for anyone but it was quite the shocker...

It's time to find out, the more adult part of her said. You have to see the world before you can give it up here. She supposed that was right. Didn't the Amish send their kids out on rumspringa, to find out what life was like outside and make a real decision on whether or not to stay in their community? So, maybe she was on a kind of vampire rumspringa.

It felt different from what she expected, leaving Morganville... leaving her friends behind. Leaving Shane. 'They're coming. You should go.'
'Should I not see you off?'
'In that get-up?'
Myrnin looked down at himself, baffled. 'It's most elegant!'
'When you were partying down with Beethoven, maybe, but today you look like you're on your way to a fancy dress ball.'

'I know,' he said. 'Look, I hate goodbyes too. But sometimes, we need them just to survive.'

It was, she thought as she picked up her backpack and headed toward her departure gate, the scariest thing she'd ever done, and the most freedom she'd ever had.
Ironic.

'I'll give you a ride,' Michael said. He walked over to my backpack and picked it up like I'd loaded it up with feathers. 'You got weapons in here?'
'A few.'
'You know that it'll get your ass arrested out there, right?'
'Only if I've got really bad luck, or I decide to hold up a liquor store with 'em.'
'You are a cocky bastard, did I ever tell you that, bro?'
I flashed him a grin, 'Did you really think you needed to?'

'You watch your back, Shane. I mean it.' Her voice was muffled against my shoulder, and it sounded unsteady. 'You come back to us or I swear, I'll find you, dig up your stinky corpse and kick its ass until it freaking disintegrates.'

'I know,' I said. This time, my voice came out softer than I intended. 'That's kind of what scares me. Because what if she doesn't need me any more, man?'
That got me a sideways flash of a look before he turned his attention back to the road. 'She needs you for more than just protection. It's how it works. You want the strong girl you understand that she's with you because she wants to be. Not because she has to be. You know that, right?'

He laughed again, low in his throat. 'Kidding, Claire. I'm just saying people change. If you're not there for it, it's not always easy to adjust to it, right? Which is why I hate this. I hate missing your life. I hate missing those little moments that change you. Because they're going to change us.'

'I'll go in, and Jesse can stay out here and guard the car,' Pete offered. 'Is this thing you've got heavy?'
'A little,' Claire said. 'It's not bad.'
Jesse patted Pete's shoulder. 'Let my man here carry it, he loves showing off his muscles for the ladies.'
'Don't be sexist. I flex for guys too.'
'Yeah, but not with so much style.' Jesse winked.

'...You're an eighteen-year-old from Podunk, Texas, after all. They don't know you're secretly badass.'
'Am I?' Claire asked. Jesse didn't know anything about her- or at least, she'd assumed that to be true.
'Oh yeah,' Jess said and smiled off into the darkness. 'You couldn't possibly have survived Myrnin if you weren't.'

'Let's hope everybody can keep it together this time.'
'Let's hope,' Claire said. 'And like Shane always says, pray all you want, but keep the shotguns loaded.'

She needed a hug, but she settled for extravagant air kisses from Eve, and a movie-star fond smile from Michael, and then she logged off to face the empty, cold house that had less personality than a broom closet in what she still thought of as home; the Glass house.

I remembered a thousand wonderful things, and then all the bad things invaded right after them, because when the wall comes down it's too late to try and build it again.
Pandora's box was open.

'He's blowing you a kiss. Okay, actually, he isn't, but he ought to, so I'm saying he did. But the point is, we'll be there in a couple of days, since Michael says he doesn't plan to sleep. If Myrnin pokes his crazy head up before then, call me and try to keep him, you know, stable.'
'Is he unstable?'
'I don't know, how can I tell? You're the crazy whisperer!'

'Nothing here is like fighting vampires,' I said. 'It's more like fighting smoke. I think I like it when I had an actual enemy to face.'
'Oh, don't worry, you have some. We just haven't seen them yet,' Jesse said. 'But we will. And when we do...' She showed a fang, just for a moment; anybody who happened to catch a glimpse would have doubted their sanity, especially since the teeth disappeared in a flash. 'When we do, we'll settle this Morganville style.'

She hit him in the shoulder. 'I don't need you to protect me.'
'Then why am I going first?'
'So you can take the first punch while I throw the second?'
'So I'm bait? Ouch. You've been in Morganville way too long, girl.'

'We must go, and quickly. We can't stay here,' Myrnin said. 'Oliver and I are being hunted.'
'By who?'
'Whom, my dear girl, whom, grammar really has descended to the lowest-'
'Myrnin!'

'I'm good. And it's good to see you've kept up the tradition of getting the holy shit beat out of you, even when you're in a nice, civilised place.'
'It was not my fault.'
Michael just shook his head.

Jesse was out, and Myrnin was helping her pull Liz free. Michael standing ready, grabbed Eve's reaching, flailing hand and yanked her out, too, and straight into his arms.
Nobody hugged Oliver. Not surprisingly. Although Michael did frown at the sight of him. 'What the hell happened to you?'

Claire found him lying still on the ground, eyes shut, and she thought she might have actually screamed; he was lying like Derrick, pale and still and bloodied, and the blood that was on his face dripped to the concrete.
Then he opened his eyes and said, in a small, annoyed voice, 'Ouch. I haven't had that happen in ages. I still don't favour it.' And a bullet literally pushed its way out of his forehead.

'Don't be a git, blood is blood. But I'm not presently in quite that much need. Don't worry, I'm sure there will be a further catastrophic disaster for which we will be woefully unprepared, if our luck holds.'
'Damn, Oliver, that is some industrial strength sarcasm,' Shane said. 'I'm surprised. I thought you were saving it for something special, like the Apocalypse, or at least tea time.'

Everything Dr Anderson was saying was true, but - but it didn't describe Myrnin, not really. It wasn't his fault. He tried, tried hard, to be a good person, a real person, not just a soulless monster sucking blood out of people.
But when he failed, he failed spectacularly, like a doomed meteor plunging to Earth.

Liz was confused and scared, and she bolted forward, trying to get free of all of us crazy people; I couldn't say I blamed her. We weren't exactly the world's most credible rescue crew ever, what with all the blood, Michael burying his fangs in a guy's throat, Eve ignoring it to scoop up his fallen weapon, and me trying to puke against the wall.

It was a promise he couldn't keep, she knew that, but she loved him intensely for trying. All the differences she'd thought existed between them...those had fallen away, when it counted. She'd craved a normal life at MIT, but now...now, she had to face the fact that Morganville was never letting go of her. Even when she'd thought she was escaping for a while, it had followed her. No, it had been waiting for her.

'You'd better, jerkface,' Eve said. 'How's the head?'
'Taped,' he said. 'It's fine. Chicks dig scars. Wait, did you just call me jerkface? Are we back in grade school?'
'I love you,' Eve said.
He closed his mouth, fast, because obviously that was not what he'd expected. 'I, uh, okay. Love you too. Can we stop that? It's uncomfortable.'
'Jerkface.'
'Much better.'