I'd Tell You I Love You, But Then I'd Have to Kill You
(Gallagher Girls #1)
By Ally Carter 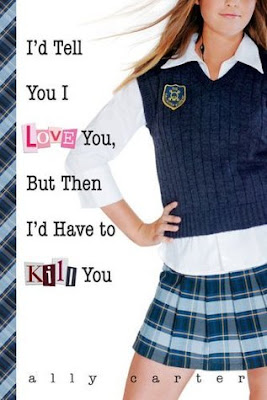 About:
Cammie Morgan is a student at the Gallagher Academy for Exceptional Young Women, a fairly typical all-girls school-that is, if every school taught advanced martial arts in PE and the latest in chemical warfare in science, and students received extra credit for breaking CIA codes in computer class. The Gallagher Academy might claim to be a school for geniuses but it's really a school for spies. Even though Cammie is fluent in fourteen languages and capable of killing a man in seven different ways, she has no idea what to do when she meets an ordinary boy who thinks she's an ordinary girl. Sure, she can tap his phone, hack into his computer, or track him through town with the skill of a real "pavement artist"-but can she maneuver a relationship with someone who can never know the truth about her?

Cammie Morgan may be an elite spy-in-training, but in her sophomore year, she's on her most dangerous mission-falling in love.


An elite academy of girl geniuses- sorry- spy geniuses. I had heard so much about this series by Ally Carter but delayed reading it because of a leeetle bit of embarrassment. My Niece and I were at the library and as I held the Gallagher academy book my Niece said 'everyone's reading those, they've all been taken out of the school library.' that trumped me a little, to think that I wanted to read the same books that my Niece and their friends were reading, when they're 14-15 and I just turned 24 :s
But that only stopped me for so long so now I'm on the second book because I loved the first. I enjoyed the missions these girls got up to, and how they all went to a spy school but had to try and deceive their more experienced and even smarter spy teachers. Plus it doesn't help that the headmistress is the main female protagonist's mother!
Cammie is one of the best spies at her school, nicknamed as the chameleon due to her ability of blending in and going unnoticed. That is until a normal boy notices her, and her life changes.
She cannot let Josh know her true identity and instead makes up an alternative life, one where she is home-schooled for religious reasons, her father is still alive and‎ she has a cat named Suzie.
But as her relationship grows, the lies tangle until - well you can read the book to find out!
I liked this book because although being a spy is all Cammie has ever known, being a normal girl is so much harder for her, and she's not so sure which life she prefers. The hidden bookcases, codename and life of tracking devices, or the normality of going to the movies with a boy who buys her a corsage and buys her cat toys for Suzie.

Favourite Quotes:
I had a pain in my neck from sleeping funny, at least five hours' worth of homework, and a newfound realization that women cannot live on cherry-flavoured lip gloss alone. I dug in the bottom of my bag and found  very questionable breath mint, and figured that if I was going to die of starvation, I should at least have minty-fresh breath for the benefit of whatever classmate or faculty member would be forced to give me CPR.

"Darling," the senator said, pointing toward the stables, "come look. They have horses."
"Oh, is that what I smell?" Mrs. McHenry said with a shudder. (For the record, our school smells just fine, unless of course your smelling ability has been irreparably damaged by a lifetime of perfume samples.)

"It's lunchtime," I explained, realising that the green M&M had gotten together with the Tic Tac in my stomach and were trying to convince me that they would like some company. "We can go eat if you want-"

But Macey only wrenched her arm out of Bex's grasp and said, "Don't touch me, b-----," (Yeah, that's right, she called Bex the B word.)
Now see, here's where the whole private-school thing puts a girl at a disadvantage. MTV will lead us to believe that the B word has become a term of endearment or slang among equals, but I still mainly think of it as the insult of choice for the inarticulate. So, either Macey hated us or respected us, but I looked at Bex and knew that she was betting on the former.

By the time the teachers stopped talking, Bex still had ahold of Macey, I had leaned across the table to grab ahold of Bex, and Liz had a death grip on a flash card that listed the top five places you should go to look for black market explosives in St. Petersburg.

Yeah, this is how a highly trained government operative behaves when intercepted on a mission. Somehow, I think the fact that the interceptor looked like a cross between a young George Clooney and Orlando Bloom might have played into that a little bit. (If he'd looked like a cross between Mr. Clooney and say, one of the hobbits, I probably would have been far more capable of coherent thought.)

"No," I said. "I think it's kinda nice." And I did. My mom isn't famous for her pies. No, she's famous for defusing a nuclear device in Brussels with only a pair of cuticle scissors and a ponytail holder. Somehow, at that moment, pies seemed cooler.

"Oh my gosh! I'm so sorry!" I cried and reached down for him. "I'm so sorry. Are you all right? Please be all right."
"Cammie?" he croaked. His voice sounded so weak, and I thought, This is it. I've killed the only man I could ever love, and now I'm about to hear his deathbed (deathstreet?) confession. I leaned close to him. My hair fell into his open mouth. He gagged.
So....yeah...on my first pseudo-date, I not only physically assaulted my potential soul mate, I also made him gag-literally.

Ignorance is bliss, after all. But the problem is, for spies, ignorance is usually pretty short-lived.

Well, obviously I didn't mean "The truth, the whole truth, and nothing but the truth" truth. More like Code Red truth- the abridged kind. Spy truth.

I wanted to punch and kick and make him feel as much pain as possible, but I remembered that no amount of P&E training would help me make him hurt the way that I hurt. Even at the Gallagher Academy they don't teach you how to break somebody's heart.
Posted by Zed at Tuesday, August 13, 2013