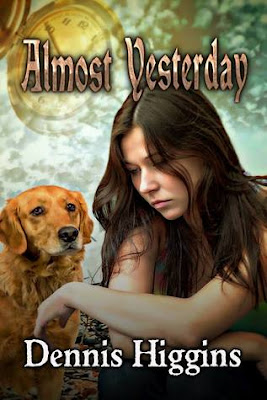 About:
Beautiful Cathy Callahan found love at the most unexpected time and place…1906 in San Francisco. It was during the most destructive earthquakes in US history. The trouble is she fell in love a hundred and ten years before she was born. Could her best friend Dawn, keep her from staying in the past?
Meet the most powerful time traveler of them all, a lovable Golden Retriever named Hickory Dickory Doc. Discover his unique and surprising origin.
Follow the adventures of the Time Pilgrims as they travel to many fascinating times of the past. Go with Katya and Cyrus to England where they investigate the appearance of the Titanic in the Southampton docks, meet the Beatles and experience the London Blitz firsthand.
Chase a mysterious man across time with Lesley and Seth as they experience three romantic world’s fairs in Chicago—1893, 1933 and 2033. During one, Lesley runs into her teenaged self.

My Thoughts:
The story itself is about time travel and about the different journeys of a group of time travellers or 'pilgrims.' It took me a while to get into the book, which is purely my own fault as 'Almost Yesterday' is part of a series. I love books with lots of characters, because it helps me try understanding the story more. I also liked how each scene would end in a cliff hanger, and then the story would switch to another cliff hanger and so on.

'Almost Yesterday' has a number of smaller stories hidden inside it, for example the famous dog that can also time travel and saves the pilgrims in near-catastrophic scenarios. Then there is Cathy, who finally finds love. The only problem is that she falls in love with someone from wayyyy in the past.

The themes of friendship, family and personal beliefs run through the story,  but the balance is great; it's not too preachy to get annoying. Howie's character is probably my favourite, because he is very blunt and often rude but once he is in a relationship, the good comes out and we realise he is not as bad as he is made out (although I like the snarky version of him better!).

The colloquial language used in Almost Yesterday was fun and at times rather strange since the book is based in 2037 and words like 'radical chill' and 'hearts' are everyday terms for the characters. It was bizarre to imagine the 'normal' phrases of the future. The 2001 based party was a brilliant idea, as it made me think of what people will remember of our present.

What I liked most about this book is that not only are the pilgrims travelling to important, historical events in the past, we have an insight on the future, since their present is 2037. Dennis must have undertaken a lot of research and I can't imagine how he got his mind around all the times and dates!

"That would be super-duper," said Katya. "I'm starving. I'm sorry I was so cautious of you." She then put her hand on Nancy's shoulder. "Friends, like books, should be few and well chosen. I have chosen you as my favourite novel."
"Sure ya have, dearie," said a confused Nancy.

"Well, I for one think that this is truly a blessing," Centehua interjected. "You must be very proud. It is great use of your God-given talents."
Howie frowned "Listen, cute Mexican girl whose name I can't pronounce...the talent is mine and nobody gave it to me. I don't believe in God."
Centehua flashed with embarrassment.
"Since when?" asked Dawn. "You used to."
"Since always, and don't give me that other timeline B.S. because this is me and it's the only Howard Miller I've ever known or cared about and there just ain't no God."

As they walked out of the Spiess room, Dawn whispered to Cathy, "Sheesh, on our first pilgrimage and people will take me as a slave and you as a hooker."
"Or both," Cathy said with a laugh.

One of the men came over to her. "Don't worry, Miss, it was just a little bump; they'll have the engines going shortly and we'll be back on our way. This ship is unsinkable, you know."
Katya remembered a quote from a survivor: "To say a ship was unsinkable was flying in the face of God."

"Well, I got news for you, girlie; I think Cartier may like you more than just a friend. He never stops talking about you."
Centehua looked concerned. "I don't want that."
"Well, sometimes we get what we don't want," Howie answered with his mouth full of pizza.

"Friendship is a sheltering tree. I look forward to meeting you." She smiled and vanished back to her own time.

"It must be tough," Kevin empathized. "I wish I had great words of wisdom to give you. One thing I learned from life and from being a time-traveller is that nothing stays the same. You may have a new set of problems next month or next year, but the ones you have today will pass." He patted her knee.
April looked at him for a moment and tears welled up in her eyes. "It's already worse," she mused, staring into his eyes with tears streaming down her cheeks. "I'm pregnant."

Louie shrugged. "I sort of like learning about the past. Centehua here has been teaching me about the Aztec and Mexican people. Did you know that the Aztecs used to have human sacrifices to their dragon snake god before they converted to Christianity?"
"Radical chill!" exclaimed Howie. "There are a few here I'd like to sacrifice."

Stephanie thought for a moment. "You mean you're from another year? You can control it now?"
"Yes, indeed," said Katya, smiling. "We work as secret time-travellers. We come from the year 2037."
"Murder," Stephanie said, putting her hand to her mouth. "It's like a story out of a five-pence novel."
"More like fifteen dollars where we come from," added Cyrus, feeling completely out of his element.

She laughed. "Not at all. It was all my idea. I just needed to know that my friend had found the true man of her dreams."
"Well, I hope I can live up to that," Cyrus replied. "I bet you're a great kisser though."
"If I do say so, myself," she answered, "I have been told, I'm the best."

"I know we only met this morning-"
"Where you picked me up and threw me over your shoulder," she inserted.
"Yes, but when I set you down again, I realized that you had stolen a large piece of my heart. I know from the depth of my soul that I could love a woman like you for the rest of my days."

Katya answered the door. "Welcome to my home; may our friendship be as love without wings."